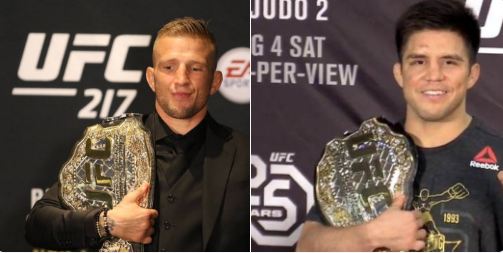 The super fight to determine the next champ-champ is one step closer in the making, as the UFC flyweight champion Henry Cejudo faced off with the UFC bantamweight champion T.J Dillashaw.

The face-off was staged in the TMZ Sports Studio, in the hope that UFC President Dana White sees it and make it a reality.  Cejudo Stated that the Bantamweight belt is coming home with him to Phoenix after the fight and ‘Killashaw’ said that its easy money for him and he will strip the belt of Cejudo’s shoulder.

The duo had an enjoyable exchange of words followed which Cejudo stated that.“I am a chameleon, you can pick your poison, I can outstrike you or I can put you on your back. I don’t know how you want it T.J, but you are gonna get it… A** Up Face Down.”

Followed by which T.J replied. “Steal my lines and steal my combos as well!” The duo went ahead with a friendly face off for the camera after that.