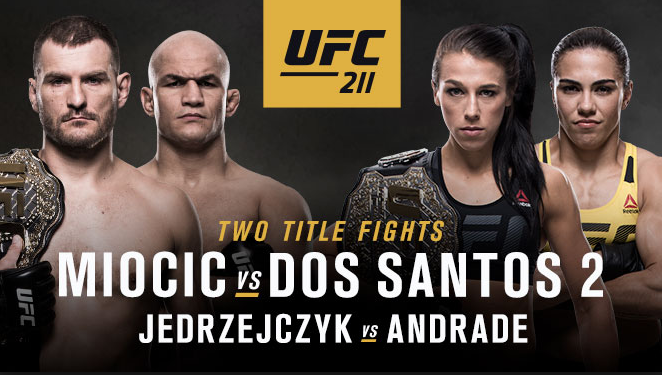 UFC is returning to our televisions this weekend with its latest pay per view (free for those of us in India!) on May 13, 2017 from the American Airlines Center in Dallas, Texas. Headlined by not one but two championship fights, this event will hopefully break the PPV curse of 2017, as all the PPV events held this year so far have under-delivered. Here’s to hoping that the smallest and the heaviest champs in the UFC will create magic!

The card, on paper, looks terrific and is quite deep. Apart from the two title fights at the top, the main card will feature the BJJ ace Demian Maia against a rejuvenated Jorge Masvidal, fan-favourite Frankie Edgar against up and coming star Yair Rodriguez and Olympic gold-medalist Henry Cejudo against another young gun Sergio Pettis.

In the main event, Stipe Miocic will defend his Heavyweight Championship against former Champion Junior Dos Santos in a rematch of their 2014 fight. The matchup, when announced, was a little confusing and made a lot of sense – both at the same time. ‘Cigano’ has not fought in over a year and is not even on a win-streak, being 2 and 2 in his last four fights. His last performance against Ben Rothwell was spectacular, but not title-shot worthy, especially considering the fact that he was coming off a loss. But then again, there are no true contenders in the Heavyweight division and the last guy to beat the champ was Dos Santos. Plus the first fight between the two wasn’t a dull affair either. Because of these reasons, the matchup was welcomed by fans and pundits alike.

Unlike his opponent, Stipe Miocic is on a tear. He has won four in a row with the latter three coming by ways of first-round knockouts. He has defeated three heavyweight all-time greats – Andrei Arlovski, Fabricio Werdum and Alistair Overeem – in his last three fights. The first fight between these two was very close, with ‘Cigano’ edging out a decision. This time, though, Miocic is heavily favoured to win. Although in this division where fortunes can change with a single throw of hand, nothing is certain.

Joanna Jędrzejczyk will look to defend her Strawweight crown for the fifth time against the number one contender Jéssica Andrade in the co-main event. Andrade is the clear top contender, having won all three of her fights at Strawweight. Joanna, on the other hand, is undefeated. This also promises to be a fun fight, solely because all Joanna Jędrzejczyk fights are exciting (and violent) affairs.

Joanna Jędrzejczyk is on the cusp of greatness. She has defended her title four times and is already the second longest reigning champion in the UFC. While she hasn’t exactly been starching opponents, no one has even come close to beating her lately. Task for Andrade is momentous and this is what makes this fight interesting. Will Joanna win again or will Adrade spoil the party? Tune in to find out (okay, I know that was a cliché)!

In a very interesting and nonsensical – if I might add – matchup, Demian Maia will take on Jorge ‘Gamebred’ Masvidal in what is presumably the Welterweight title eliminator fight. Demian Maia, in the eyes of many, had earned his shot at the Welterweight title after his first round romping of Carlos Condit. He was happy to wait when champion Tyron Woodley was booked to face Stephen Thompson again after they went to a draw the first time. The UFC, however, had other plans. Masvidal, after his emphatic second round knockout of Donald Cerrone, repeatedly called out Demian Maia. The UFC subsequently set up a fight between the two. A win here for Masvidal could propel him to a title-shot. Demian Maia, on the other hand, has nothing to gain here and it could prove catastrophic for him should he lose. A win here only gets him what should be rightfully his anyway: a shot at Tyron Woodley. Regardless, the fans win as they get to see an exciting fight.

In another surprising matchup, veteran Frankie Edgar will take on young star in the making, Yair Rodriguez. This is Rodriguez’s biggest test to date and a win here will put him in the upper echelons of the Featherweight division. A win for Edgar here doesn’t do much. He has been knocking on the door of the Featherweight title for a long time but this fight won’t provide him a title shot. The fight nonetheless is must watch, just like every other Frankie Edgar fight.

Henry Cejudo will look to end a two fight skid against rising Flyweight Sergio Pettis. The younger Pettis is on a three fight win streak and a win here will put him in contention for a title shot. Cejudo really needs a win here and would definitely want to avoid losing three in a row. This is a small step down in competition for Cejudo, who is coming off losses to the two best Flyweights in the world.

Also, on the preliminary card, former Lightweight champion Eddie Alvarez will make his return after losing to Conor McGregor against Dustin Poirier. This fight hardly has any title implications, but is a fun fight nonetheless. Eddie Alvarez has taken sufficient rest since getting KO’d by McGregor, so look for an Eddie who is out for blood!

All in all, this might be the best UFC pay per view card of 2017. All the fights look promising and the event has the right mixture of big name fighters and younger ones. Let’s all tune in on Sunday morning. It’s free, folks!