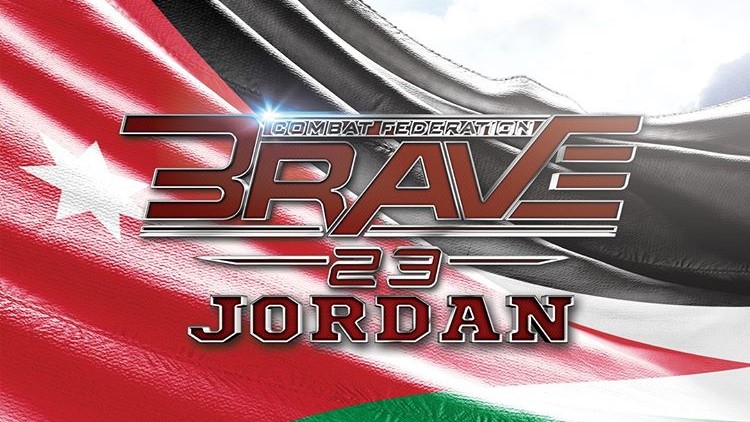 Brave Combat Federation has released the first teaser trailer for its second Jordan event. The organization announced earlier this week that it would return to Amman, in April, for Brave 23, and has now given a few more details about the groundbreaking show.
Through its social media profiles, the promotion has hinted at the return of world champions and Jordanian heroes Jarrah Al-Selawe and Abdul-Kareem Al-Selwady. While there are no bouts confirmed for the event, the teaser has sent shockwaves through the Arab MMA community as they are two of the biggest fighters in the region.
Al-Selawe has been on a tear since joining Brave, in late 2016. He has won his six bouts for the promotion, including a first-round KO of Carlston Harris back at Brave 16, which elevated him to world champion status.
Meanwhile, his countryman Abdul-Kareem Al-Selwady shocked the MMA world with a dominant first-round win over Brazilian veteran Lucas “Mineiro”, to claim the undisputed Lightweight title. Al-Selwady is also undefeated under the Brave banner, with five wins in as many fights for the promotion.
Other names ventilated during the teaser are those of Mounir Lazzez, who impressed in his Brave debut, Eldar Eldarov, who hasn’t fought since Brave 12, and Luan “Miau” Santiago, a recent winner against Djamil Chan at Brave 18.
Brave 23 will mark the second time the biggest MMA promotion in the Middle East lands in Amman, Jordan.
Watch the Brave 23 teaser: https://www.instagram.com/p/Btq5iwrHI4i/

Previous article
Conor Mcgregor wants to know why “worm” Kelvin Gastelum is holding the belt
Next article
Who should Conor Mcgregor fight next…?
- Advertisement -