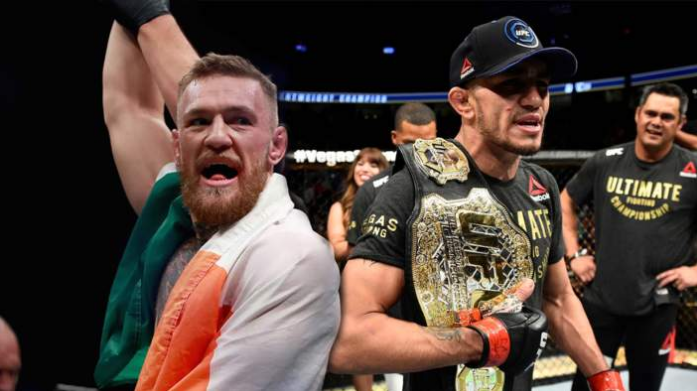 Tony Ferguson is one of the hottest acts in MMA right now. He finished Kevin Lee in spectacular fashion in the main event of UFC 216 last month. The win extended what was already the longest win-streak in UFC lightweight history to 10 wins in a row and earned him the interim UFC Lightweight Championship in the process. This fulfilled Ferguson’s long quest for UFC gold but he is far from done.

Popularly known as ‘El Cucuy’ or ‘The Boogeyman’, the 33-year-old American first came to prominence during The Ultimate Fighter 13 which he went on to win. He won his first three fights in the UFC before dropping a unanimous decision to Michael Johnson. He hasn’t lost since and his win-streak includes impressive wins over guys like Josh Thomson, Edson Barboza, former champ Rafael Dos Anjos and Kevin Lee.

His win over Lee not only earned him the Interim title, it also propelled him to the top of the list of Conor McGregor’s next potential opponents. Conor, of course, is the UFC lightweight champion and the fight to unite the two lightweight belts seems to be the most logical fight, at least from a hierarchical standpoint.

If the fight does happen (and it is looking more and more like it just might), it raises a big question: How do these two elite fighters match up?

Tony Ferguson has the most strange and unorthodox fighting style in all of MMA. Tony has combined his grappling prowess and his lethal submission game with his highly unorthodox striking to produce the most peculiar fighting style in MMA. He can attack his opponents from all angles and this makes his opponents hesitant at times, which works in Ferguson’s favour big time. His vaunted D’Arce choke has finished three opponents in his UFC career. He is also known for his incredible cardio and his iron chin. In a 26-fight career, he has never been stopped due to strikes. In his most recent fight against Lee, despite being pummeled from the mount in the first round, Tony showed immense calm and cardio and came back to win the fight by a triangle choke in round three.

Conor on the other hand, is quite the opposite, style-wise. Conor is known for his clean, crisp and powerful striking. He possesses deadly knockout power, which the likes of Jose Aldo and Eddie Alvarez found out the hard way. He, however, is not known for his grappling and all three of his MMA losses have come by way of submissions. His takedown defense has, however, shown significant improvement in his past couple fights.

Conventional wisdom would say Conor holds the edge in striking and Tony does in grappling. However, Conor might not be as easy to takedown and even Tony’s seemingly haphazard striking may give Conor problems.

Conor is also known to gas in fights as evident in both the Diaz fights and the Mayweather boxing match. This is one area which might end up playing in Ferguson’s favour, if Conor doesn’t end it in the first couple rounds!

All this, however, will be for naught if the fight doesn’t happen. Conor, being Conor, has no lack of options when it comes to fighting. Paulie Malignaggi is aggressively campaigning for a boxing match with Conor. And the trilogy fight with Nate Diaz is always there. Tony Ferguson has no doubt in his mind that he should be the one to fight McGregor next and he immediately called McGregor out following his win over Lee:

“Where you at McNuggets you f**king piece of s**t!?” screamed Ferguson in his post-fight interview. “I’m gonna (sic.) kick your ass! You better come and defend that belt, you better not vacate motherf**ker!”

While McGregor remained silent, Tony continued his attack on McGregor:

“I’ll ankle pick him no problem,” Ferguson said. “I’ll set him on his ass and everyone’s the same size on the ground. Conor McGregor is going to be running away like Katsunori Kikuno. I’ll get him on the ground and I’ll finish him with a D’Arce choke or any choke I please.

“He poses no threat to me. That boy is scared. He’s never mentioned my name one time. I’ve got 10 consecutive victories. I’m the interim champion.”

McGregor finally said Tony’s name in a way only he can: 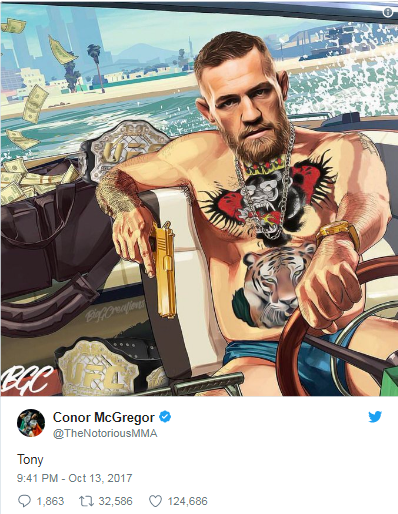 A few days ago, Conor said he feels the Tony fight will be next:

“I’ve got everyone clawing at me, trying to get at me, and that’s from multiple sports, multiple organizations, multiple everything,” McGregor said. “It’s been like that for a long, long time, I feel, so it’s just another day for me. I know there are many contenders in the UFC. There are many boxing contenders as well. What interests me is certainly a UFC bout, certainly a defense of my lightweight title. There is a fighter with the interim lightweight belt. I feel that will be next. We’ll see how negotiations go.”

While the Diaz trilogy fight may be more lucrative financially, this is the fight to make. Not only will this legitimize the lightweight title, it also promises to be one of the greatest fights in the history of the lightweight division. Keep your fingers crossed!