The Curious Case of the Diaz Brothers 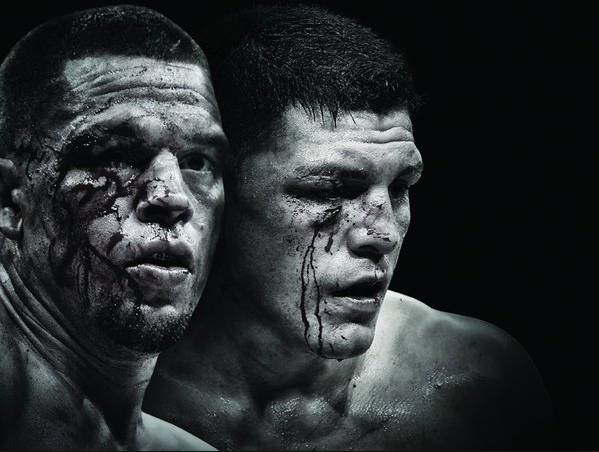 You can’t understand the Diaz brothers. You may very well have to go to Stockton and knock on their front doors to get to know them, although they might not even open the door for you. That’s just how these guys are. They are nice and they are arrogant, they will flip you off and they will hug you, they will slap you and they will help you to your feet; in short, they are the Diaz brothers and they are as real as it gets. MMA is not a sport to them, no. They hate fraternizing with the enemy – that is to say their opponent – until the fight is over.

“This isn’t a sport; this is war; this is warfare.”, Nick has said in the past. And that is what life taught him, growing up in Stockton, California.

Nick Diaz had a difficult childhood. From fighting in high school all the time to losing the girl he loved to a suicide, Nick did not witness the niceties of life growing up.

“My mom and dad taught me nothing but ABCs. I was moved from school to school, put on drugs and made fun of by classmates because after being disruptive in class the teachers would always tell the other kids I was on meds and sometimes not take them.”

The elder Diaz also had to go through the traumatic experience of his girlfriend’s death, at the tender age of 16.

“Before I ever had my first pro fight, July 5, 2000, Bart (Nick’s friend) had a party at his house. The night before, Stephanie had told me she loved me. After the party, I was going to go back to her house with her brother — he was my best friend — but some friends weren’t doing well and headed to my house. So, I had to go.

An hour later I got a call from her mom saying, ‘Are you with Stephanie?’ She came straight to my house to get me, took me up and down the Frontage Road on Highway 99 by my Grandma’s house next to their trailer park.

There was a wreck on the freeway. I jumped the fence and saw only one car and ambulances.

She had walked and killed herself on the freeway. The girl I loved more than anything had tried to kill herself for the third time and succeeded.”

People say Nick has a very negative outlook of things. Any man would, if they had a childhood half as tough as Nick had.

“There was no way I was going to go to school. I had no money, no car. I would have driven there and stopped her. After that, I was grown up. It was all over. I wasn’t a kid anymore. I won my first fight in the first round with a choke and all I could think about was her, just like when I was in school. “

Nick said it himself, better than I ever could. Such incidents shape you for life and probably inspired Nick to become the best fighter in the world, which he believes he is.

“I would run seven miles and back to her grave just to promise her I would make it as a fighter like she knew and had told me she knew and was proud of me. “

It would be an understatement to say that Nick made it, and she is proud, wherever she is. 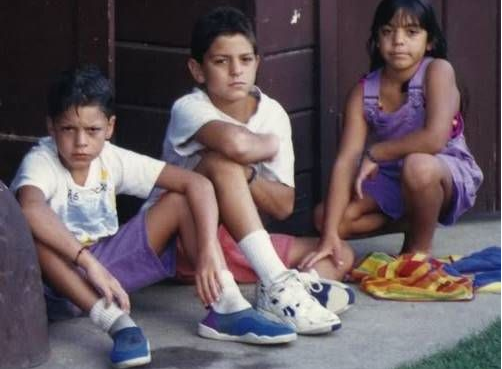 Nate and Nick with their sister

Nate probably had as difficult a childhood, but he at least had an older brother to look up to.

“We were pissed off kids, but she’d say (their mother), ‘No, people are good’. But growing up, Nick was older, he knew everything was bad. He knew other people weren’t like this, they had good stuff and nice houses. We’d be sitting in the motel waiting for my mom to get off work. My sister and I didn’t know any better. As long as cartoons were on, we were fine. But Nick, he knew. People would always mess with Nick. He’s always been like that.”

Sometime during high school, Nate followed his older brother into a Jiu-Jitsu gym. He was no good in school, so it was natural for him to follow up on something he excelled at. Before he knew it, he was training to be a pro fighter, which his brother had already become. From negotiating a last-minute contract for the WEC Lightweight Title against Hermes Franca, to being in his corner, Nick has always been a big part of Nate’s career in MMA. The Diaz brothers share a brotherly bond that many aspire to have!

Fighting all over the world in multiple promotions, winning World Championships in multiple promotions and having some big fights in the UFC, Nick Diaz has had a pretty successful career so far. It hasn’t been an easy ride for him, but it could not have been more difficult than the one Nate took.

Nate Diaz won TUF in 2007 and embarked on a five-fight win streak over the next year and a half. With his brash attitude, charisma and penchant for finishing guys in spectacular fashion, the younger Diaz was destined to become a huge star. However, that wasn’t to happen until almost a decade later. The next few years were a hit and miss, including a title fight loss to Benson Henderson. Despite going in there and putting out some of the best fights, Nate found himself in a horrible contract, for a guy of his caliber. With a disclosed pay of $15,000 to show and $15,000 to win against Gray Maynard in late 2013, Nate was finally disillusioned with fighting, and the small paychecks that it brought his way, after almost seven years of service in the UFC.

Nate wouldn’t fight again for over a year, after having asked the UFC to renegotiate his contract. His request fell on deaf years and Dana went public with his feelings on the matter.

“I love Nate Diaz”, White said. “Nate Diaz is actually one of my favorite kids. I always got along with Nate, Nate was always great. Lowest rated FOX show ever. His numbers, he doesn’t pull the numbers in. Nick (Diaz) is a needle mover. Nick moves the needle. [Nate] doesn’t pull good numbers.”

“He seems like he’s popular when you’re looking on f**king Twitter and some website,” White continued. “But the numbers, the real numbers, tell the truth. We know who moves needles and who doesn’t move needles. If Nate Diaz was a massive needle mover, we’d have called him. He’d be on the phone; we’d be figuring it out and we’d work it out. He doesn’t move the needle.”

I think the questions regarding Nate being a ‘needle mover’ have now been sufficiently answered, but I digress.

Nate returned in December of 2014 against Rafael Dos Anjos and made an insultingly low $16,000 in a humiliating loss. Nate had had enough. A fighter who fought 20 times in his first seven and a half years in the UFC, would only fight three times in the next two and a half years.

Just like Nate, Nick also was a very prolific fighter. The only real period of inactivity in Nick’s career was an almost two year lay-off after his title fight with Georges St. Pierre, post which he had announced his retirement. Having completed his marijuana related 18-month suspension in August last year, Nick has not agreed to a fight yet.

Recently per reports, Nate has turned down a fight against former Lightweight champion Eddie Alvarez and Nick turned down fights against both Robbie Lawler and Demian Maia.

So, the natural question arises: Why would two guys, who fought as much as they did,  turn down fights now? In Nate’s case, the answer is simple. After getting criminally underpaid for years, Nate finally broke the proverbial glass ceiling with his two mega-fights against Conor McGregor. He reportedly made millions from those fights and now only wants big fights.

“I’m only fighting at lightweight for a big fight or 20 million just to take the call,” Diaz told MMAFighting.com. “Until then, I’m just living my life.”

Well, that’s probably not happening, but I see what you’re saying, Nate.

After spending years fighting everyone for pennies, Nate only wants money fights now. Plus, there is a prospect of a third fight with McGregor which he’s probably waiting for. Dana at least thinks so:

“We keep offering Nate fights and he keeps turning them down,” White told TMZ. “Nick, too. I don’t know. Maybe he is [waiting for the trilogy fight with McGregor].”

Upon hearing this, Nate responded in the most Diaz way possible:

The one fight that he’s talking about is the Eddie Alvarez fight:

And someone once said this guy is not a needle mover!

As for Nick, he probably has similar reasons for turning down fights. No one in their right minds would ever assume that Nick is ducking anyone. This looks like a money thing, again. Dana had the following to say about Nick:

No offence to either Robbie Lawler or Demian Maia, they are not big draws. Nick probably wants a big name for his return or maybe a title-shot. Nick was probably hoping to fight GSP upon his return, but that’s not happening, at-least not now, as GSP will be fighting the Middleweight champ Michael Bisping sometime this summer. One or both Diaz brothers were widely expected to fight at UFC 209, but that didn’t come to fruition either.

Despite the title of this article, the case of Diaz brothers is not curious at all; it makes much more sense than people think. Right now, they are just chilling, probably smoking pot and not giving a s**t. That’s just what made the MMA world fall in love with them. But fans are now clamoring for their return, especially Nick who hasn’t fought since January of 2015. They will eventually return; the only question is when.

I guess only time will tell.