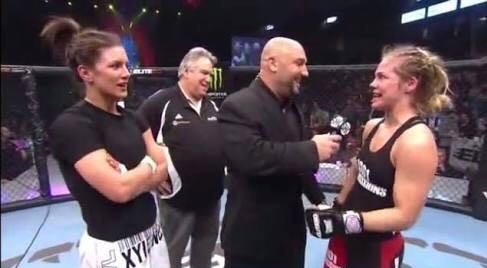 Gina ‘Conviction’ Carano made her pro MMA debut on 10th June 20016, at World Extreme Fighting against Leiticia Pestova. This was the first ever sanctioned female MMA fight in Nevada. It just took Gina 38 secs to take her opponent out via TKO in the very first round. Gina went on a 7 fight win streak and quickly become the face of women’s MMA.

The hard fought 3 round brawl between Gina Carano and Julie Kedzie at the Elite XC  – Destiny (February 2007) event drew everyone’s attention to Women’s MMA. This fight had everything to win the ‘Fight of the Night’ award at that event. Both Gina and Julie showcased their striking skills and ground game proving once again that women can compete in the same league as men.

For the first time ever, Strikeforce assembled a main event headlining the face of WMMA – Gina Carano and rising contender Cris Cyborg in Aug 2009. To top that up, they made it a Bantamweight title fight. An overwhelmingly strong Cris Cyborg, put on a one sided beatdown and clinched the title with just 1 sec left in the first round. With this fight, Cyborg proved everyone why she would be a dominant force in the women’s MMA.

Cris Cyborg defended her 145 lbs title belt against Hiroko Yamanaka at Strikeforce – Melendez vs. Masvidal (Dec 2011) but her 15 sec KO win was overturned as she tested positive for anabolic steroids in a post-fight drug test. This gave many the ‘ohh I told you she was on something’ moments that brought about a huge outcry against Cyborg. With no one to contend for the 145 lbs she had to be stripped off the title and the division shut down.

With Gina Carano leaving the cage and pursuing her acting career, it was time for another rising star to be replaced as the face of women’s MMA. Step in Ronda Rousey – the Judo and arm bar specialist who won her seven straight fights via arm bar in the first round. Her fight with Miesha Tate (March 2012) elevated her career and turned her into a sensation. Ronda defeated Tate via an arm bar to win the women’s Bantamweight title.