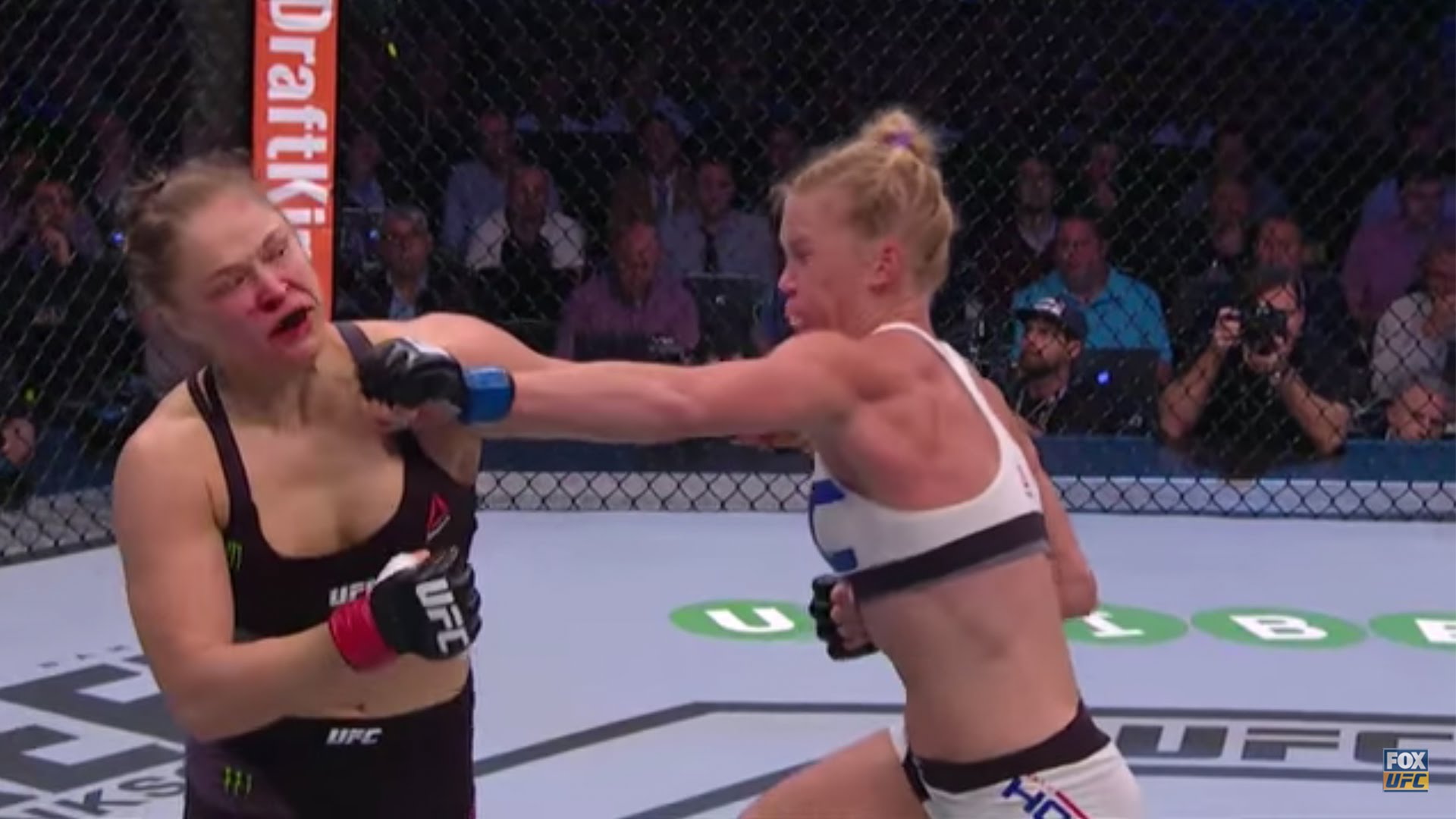 Transgender fighter Fallon Fox got handed her first defeat by Ashlee Evans-Smith at CFA 12 in Miami, Florida. Ashlee was highly vocal about this fight and there was a lot of trash talk that went in before they exchanged leather. It was the finals of the Women’s Featherweight championship, and both the fighters wanted to clinch that title. Ashlee put on pressure right from the first round and came close to winning in the second round when she had full control over Fox. The referee stepped in five seconds late until the bell went off and Ashlee dishing out ground and pound. It was in the third round when Ashlee took Fox down and was relentless in her GnP to secure the TKO win.

In just under three years since her UFC debut, Joanna Jedrzejczyk bull dozed her way to become the strawweight champion. On her way to the top, she dethroned Carla Esparza, defeated Claudia twice, easily dispatched Jessica Penne & Valerie Letourneau and won a tough fight with fellow Polish strawweight Karolina. No other female mixed martial artist has been so dominant and able to defend her title multiple times like Joanna Jedrzejczyk. She helped put her division on the map and took women’s MMA one level up.

Ronda Rousey’s rivalry with Miesha Tate took on a whole new level when Tate replaced Cat Zingano who was injured and unable to take on as the TUF coach. It was for the first time that women would coach two teams of 135 lbs male and female MMA fighters in the seasons Ultimate Fighter reality show. Juliana Pena emerged victorious by defeating Jessica Rakoczy, but it was the rivalry between the coaches that stole the show.

The Fall of the Titan

When Holly Holm’s name popped up against Ronda Rousey, many believed Holly was not yet ready to face the champion. Many overlooked Holly’s striking game – ignoring her boxing and kickboxing titles. She came in as the underdog and shocked the entire world by becoming the first woman to knockout Ronda Rousey. Throughout the fight, Holly displayed her elite striking skills and easily dismantled the champion. Her high kick was heard around the globe and it silenced the critics for good.

Welcome to the UFC – Cris Cyborg

Despite the harsh comments coming from Joe Rogan, Ronda Rousey and UFC President Dana White, nothing could stop Cris Cyborg from entering the UFC. The newly created 145 lbs women’s division was the perfect setting for the then Invicta FC champion. Cyborg went on to win her first fight against Leslie Smith and second against Lina Lansberg by headlining the main event at UFC Fight Night.