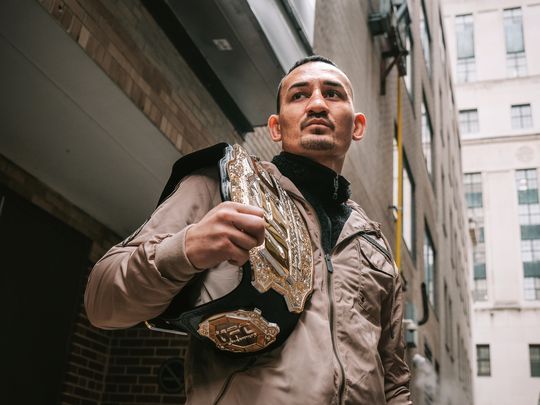 Max Holloway’s iteration of Ric Flair’s patented ‘To be the man, you gotta beat the man!’ is pro wrestling razzmatazz at its finest.

‘To be the best, you gotta beat the best…and the best is Blessed baby!’

I mean really? A catchphrase that rolls off the tongue? That’s practically promo cutting 101.

In someways, however, it seems to fit right in with how fighters in this day and age seem to want to approach their MMA careers. Gone are the days of the strong, silent Bushido types…it’s the squeaky wheels that get the grease under the WME-IMG stewardship.

And UFC Featherweight Champion Max Holloway, certainly knows how to talk the talk.

‘Let’s f*ckin do it bro. This is how legends are made’, is apparently what he told his manager Brian Butler-Au when he was approached with a chance to headline UFC 223 against Khabib Nurmagomedov.

And it isn’t just the fact that Holloway is moving up a weight class on six days notice that is enrapturing about the whole situation, or – ironically – that he’s having one of the toughest weight cuts ever according to his nutritionist.

It’s that he’s moving up a weight class on six days notice to fight a man that even the Welterweight Champion Tyron Woodley wants nothing to do with, a phenom whose unblemished 25-0 professional MMA record is almost as terrifying as his skill set.

If you’d care to ask Max Holloway though, why he would pursue a fight that dispels conventional wisdom, a fight many other fighters even in the 155 pound weight category steer clear of, he’d probably just shrug and say ‘It is what it is.’

Like it was the most natural thing for him to do. Almost like he was waiting for the opportunity to fight Khabib.

And here you thought all of those sound bytes in the past few months about how he would willingly step up to fight the Dagestani native were just savvy fighter-speak and eye-pleasing headlines, didn’t you?

Yea, Max Holloway certainly talks the talk. But how’s that for walking the walk? 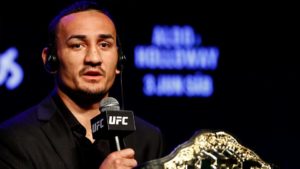 It’s quite arguable that the ‘C’ in UFC stands for Conor McGregor nowadays. I mean, love him or hate him or wherever else in the imaginary spectrum of apathy you claim to fall, you can’t deny that the Irishman’s aura looms large over the promotion.

Every self respecting fighter from 145 to 170 has called out McGregor in his own way, from threatening to take his soul to coming up with corny fast-food based nicknames in hope of goading him out of his hiatus.

It’s pretty clear that everybody that is anybody wants to fight Conor McGregor.

And when everyone else is trying their hardest to channel their inner McGregor in the hope of baiting the Irishman and the payday that comes with him, it would seem that Max Holloway, who is unapologetically doing Max Holloway, is the one who actually stands out in his refusal to conform.

The evidence is there for everyone to see.

While McGregor hastily dusted off his flash knockout of Jose Aldo to move up a weight class in pursuit of a super fight, Holloway stuck around and plugged his roots in the division, finishing the Brazilian not once but twice.

You know, just to make a point.

While McGregor enjoyed the yachts, steaks and his family in sun-kissed holiday getaways with no mobile network, Max Holloway stepped up on six days to ensure that yet another division abandoned in a state of flux by the Irishman re-finds its footing.

In short, Max Holloway did everything that the MMA fraternity would dearly love for Conor McGregor to have done in an ideal world.

It only follows suit then, that the moment he steps into the Octagon on April 7th, an exclusive club only reserved for the Irishman thus far opens its door to him as well. Well, at least we know he’s going to try his damn-est to kick it down. 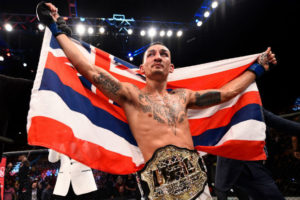 But of course, UFC 223 is still as tall an order as any Max has had to overcome in his career so far.

An ankle injury that kept him out of action not one month ago, the absence of a fight camp, a brutal weight cut in six unforgiving days and fighting a bigger man who grew up wrestling bears for fun.

The odds, and damn near insurmountable ones at that, pile up ahead of him.

And unlike Conor McGregor, who’s taken exceptionally well to the luxury of picking and choosing the right fights for himself at the most opportune moment, Max Holloway doesn’t have much choice about the do-or-die mission he has to navigate.

Should he do so successfully, parity in status with the Irishman and a super fight of epic proportions beckon in the not too distant future. Should he fail, however, a commiserative pat on his back en route to a lower weight class and the goodwill of the UFC will be all that remains.

But wherever he does end up on Saturday night, Max Holloway would at least know that he got there by his own damn self.

That he didn’t need to wade into the deluge of the dark arts, clinging onto McGregor’s Gucci mink coat, to find himself there.

That he walked the walk every inch of the way to get exactly where he stands now in his career- at the unlikely cusp of making history.

Many, however, are writing off his chances…and with good reason. His leap of faith in taking the fight may be one that is too far for them to wrap their heads around. Some, though, are cautiously optimistic…for he has, by now, proven himself to be exceptionally resilient after all.

But if you ask Max Holloway how he feels about his chances against Khabib Nurmagomedov, he’d probably just shrug and repeat what he told his manager in the first place.


This is how legends are made.