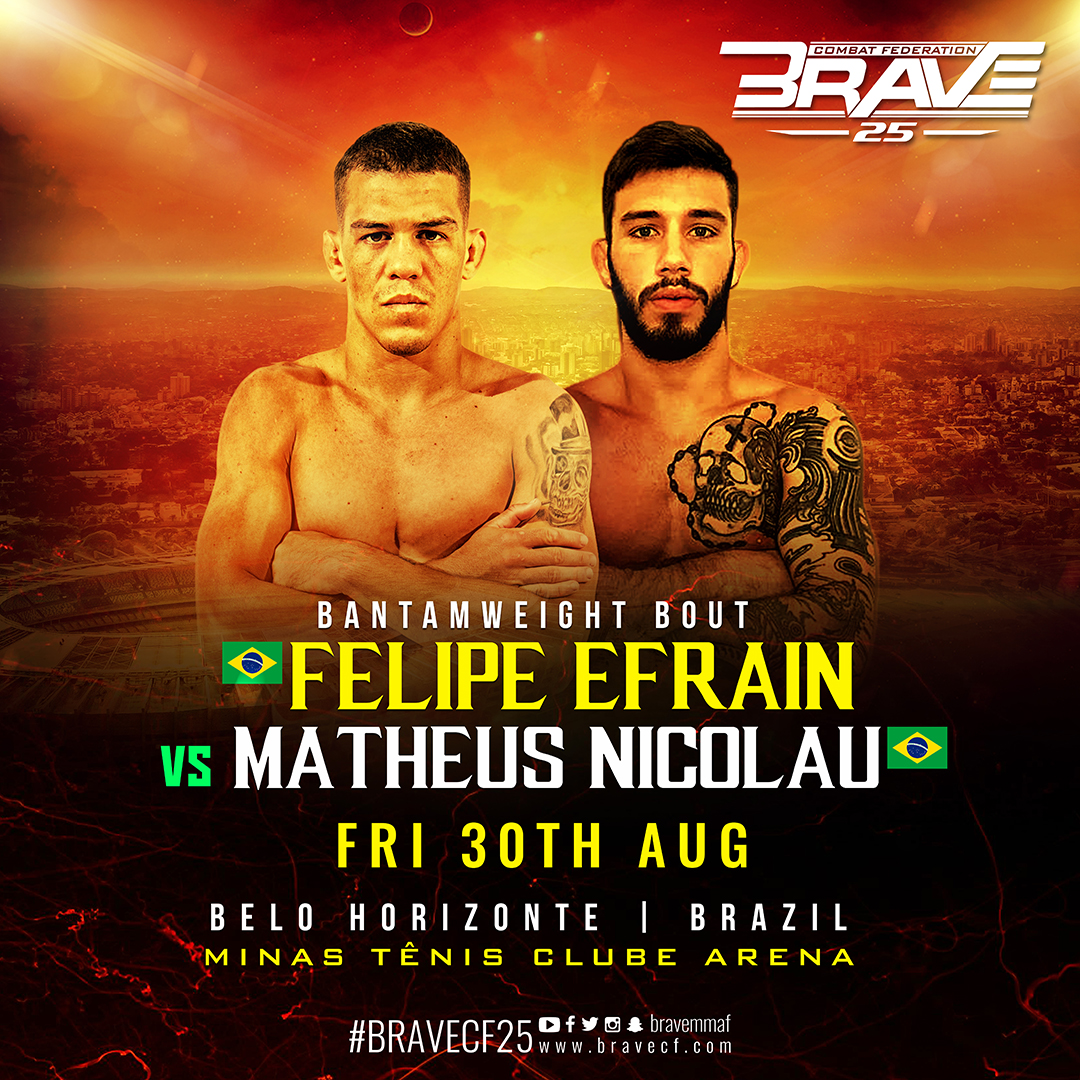 Felipe Efrain was born in Brazil, but he’s a truly international fighter. As is the case with most MMA athletes who rise to stardom, the BRAVE CF Bantamweight contender has traveled around the world looking for a challenge. Before BRAVE, he fought in the United States and Japan with different organizations.

But it wasn’t until he signed with the fastest-growing promotion in the world that his career – and his passport – were filled with trips around the globe. Since joining BRAVE, Felipe has fought in Bahrain twice, Jordan, and Morocco. Aside from his native Brazil. In a way, Efrain‘s career is a testament to BRAVE CF’s international reach. 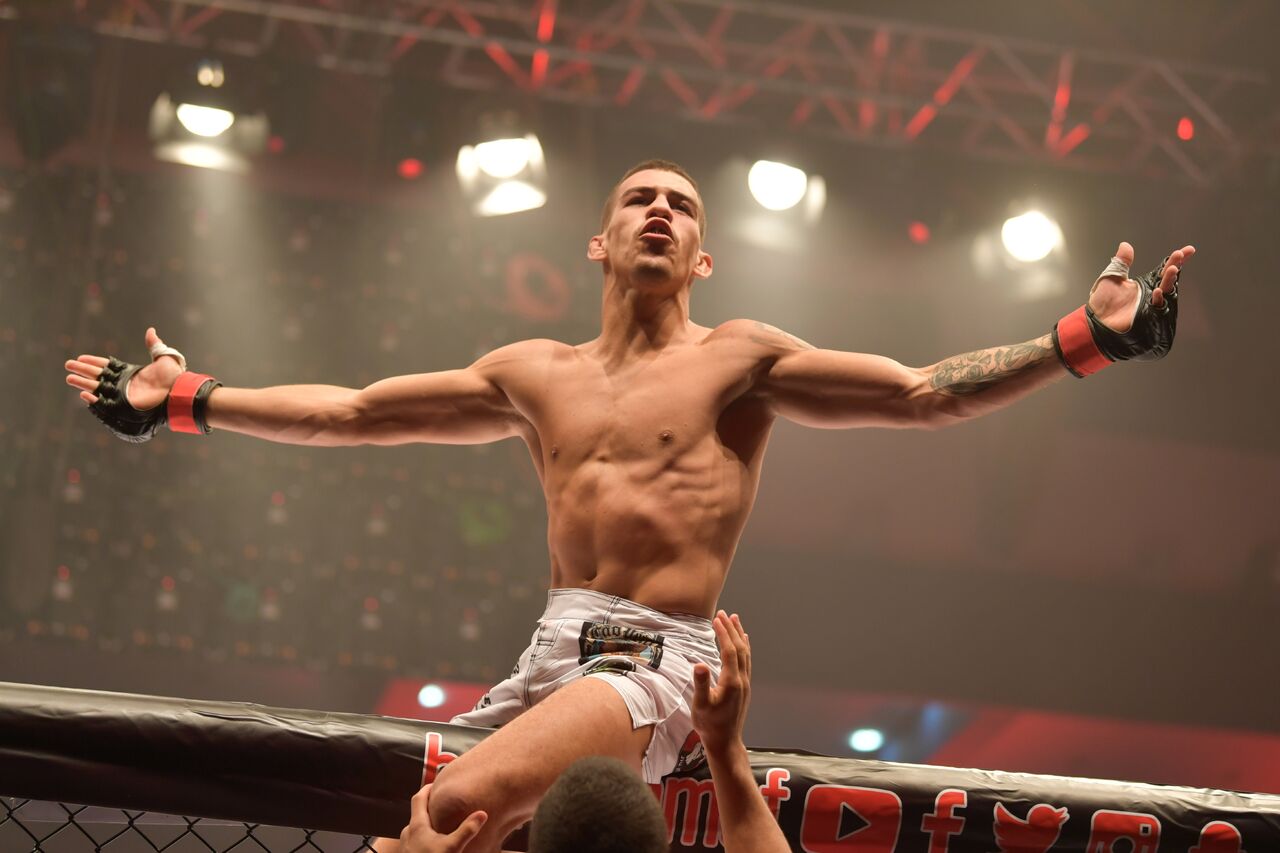 The organization strives on putting exciting shows on all corners of the world, and Felipe’s explosive style has been one of the stalwarts of BRAVE’s influence in international MMA. During his stint with the promotion, Efrain has become known for his crazy techniques and knockout power in all of his limbs, as a true muay thai representative.

He won the KO of The Year award in 2017 for his flying knee finish against Nawras Abzakh, but the prize could easily go to his body shot destruction of veteran Walel Watson in his BRAVE debut earlier that year. In 2018, he started the year backed by two of BRAVE’s most vicious finishes and was one victory away from fighting for the title. 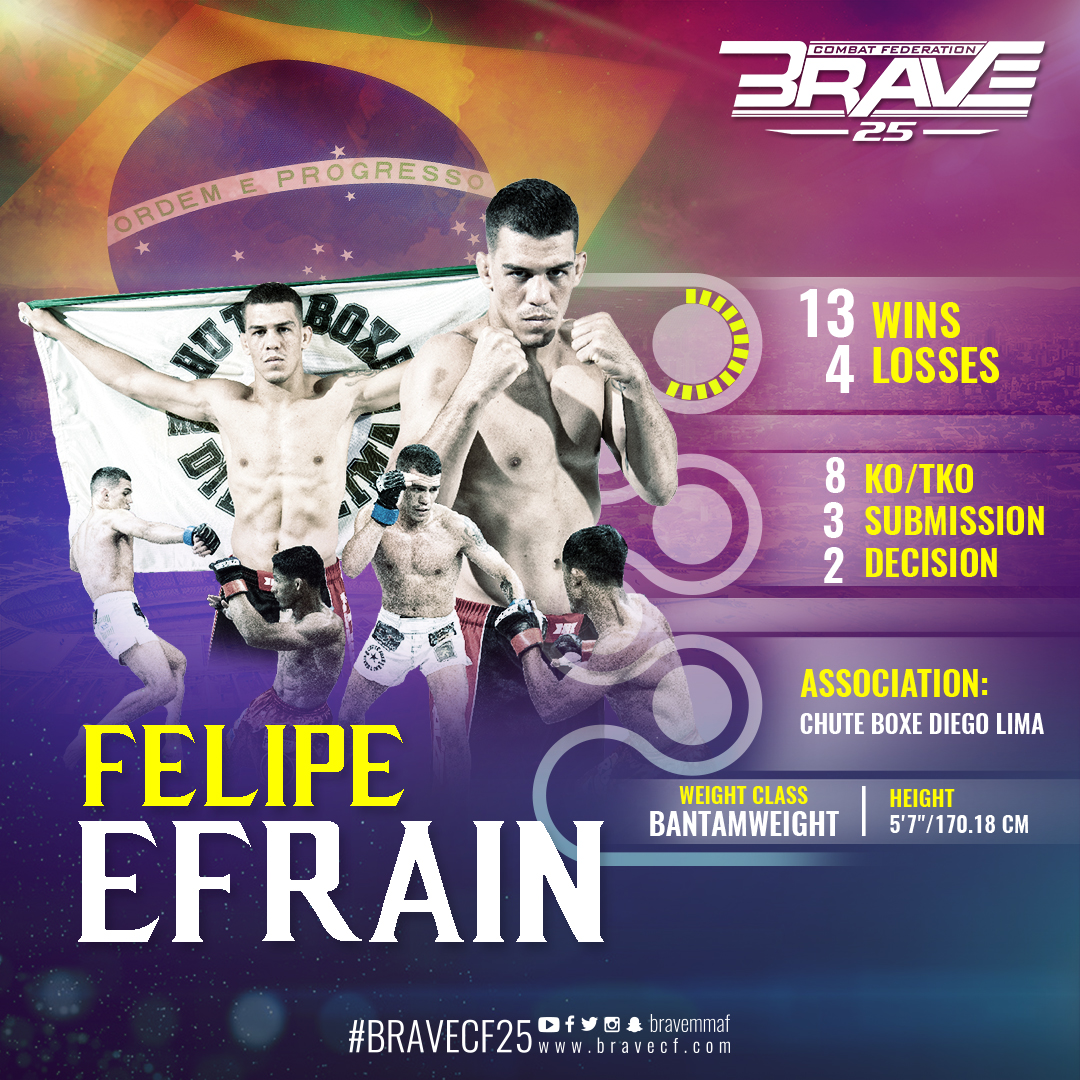 Then came Frans Mlambo, who finished him at BRAVE 10, in a much-debated stoppage. Instead of complaining about the referee’s performance in Jordan, Efrain went straight back to work. That’s another virtue of his: the work-ethic of the Chute Boxe Diego Lima product is second to none.

No matter where he’s training, he wants to be the hardest worker in the room. That discipline, coupled with his natural striking talent, makes for an explosive combination.

One which Arnold Quero felt in its entirety when the two met in Morocco. Again fighting away from home, Felipe was part of a groundbreaking moment in MMA history.
BRAVE 14 marked the first time an international organization hosted a show in the continent of Africa. And the Bantamweight striker stole the show, as he ran through Arnold Quero with a vicious combination of knees, straight punches, and elbows. Frenchman Quero didn’t what hit him until the referee was on top of him, asking if he was ok.

That performance followed a respectful call-out of Bantamweight world champion Stephen Loman. Recently victorious over Mlambo, Loman had a logical next challenger in Efrain. The fight was made for BRAVE 18, the organization’s annual trip to Bahrain and traditionally the biggest show of the calendar year for BRAVE Combat Federation.

The build-up to the momentous fight was proof of both men’s characters. They avoided any trash talk and instead focused on their own abilities and praised each other as opponents. Days before BRAVE 18, Loman and Efrain, and their respective teams met each other on the way to the sauna, where both men would be cutting weight to make the contracted 61,7kg limit.  Gym-goers couldn’t believe when they saw two opponents sharing jokes and being friendly with each other days before their bout.

That’s Felipe Efrain in a nutshell. Vicious inside the arena, a friendly and calm person outside. On fight night, however, all the amicable aspects of their relationship were thrown to the side as the two men put on an incredible fight for fans around the world. It was a back-and-forth affair, with champion and challenger having their moments. After 25 minutes of insanity, Loman’s hand was raised.

Efrain wasn’t sad or discouraged. He was grateful for the opportunity and keen to make sure that the champ had his moment. He has never publicly disclosed the hand injury he suffered during the initial rounds. That would be diminishing Loman’s feat, something he would never do.

For his fight with dangerous and experienced newcomer Matheus Nicolau, set for BRAVE 25, on August 30th, Efrain is injury-free and ready to go. It will be the first time he faces a fellow Brazilian for BRAVE and the first fight in Brazil since March of 2017. When the cage closes, he will transform. Until then, it’s all smiles and fun.