The unlikely allies of MMA 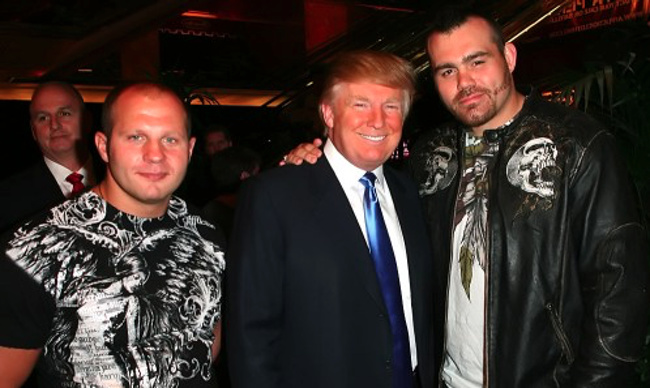 In life, change in inevitable. It is how one adapts to the changing times that defines their success or failure. The same applies to the sport of Mixed Martial Arts. From a relatively benign beginning during the late 19th and early 20th centuries, the sport has come a long way. In fact, when the sport started gaining momentum, it was looked at as a barbaric, primitive sport.

Three decades later, MMA is the fastest growing sport in the world. While the Ultimate Fighting Championship (UFC) has undoubtedly done a world of good, there have been other driving forces, that led to the success of MMA. From Sakakibara’s PRIDE FC to Scott Coker’s Strikeforce, numerous organisations helped shape the sport, to what it is today.

However, there have been anomalies as well. Polarising personalities to oligarchs, to Presidents of countries contributed to the growth of MMA. Today, we take a look at the unlikely allies of Mixed Martial Arts. 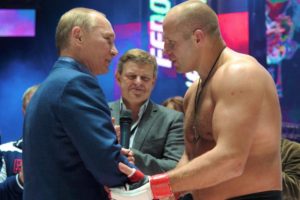 The current President of Russia is a polarising personality, to put it mildly. While Vladimir is not really known for his humanitarian deeds – especially if you read a recent article by Politico, Putin’s love for combat sports, especially MMA, is well documented. Putin himself started training in sambo at the age of 14, and also dabbled in judo and karate.

Putin is a big fan of one of the greatest MMA fighters of all time, Fedor Emelianenko. In fact, in 2012, when Fedor replaced Dmitry Medvedev as a staff member of Russia’s Council of Physical Fitness & Sports, the decree was signed by none other than Vladimir Putin!

However, one of most noteworthy gestures that made Putin such an influential figure in the sport of MMA happened in 2012. The then Bellator MMA Middleweight Champion, Alexander Shlemenko faced Anthony Ruiz. The Russian President was one of the guests present during the showdown at S – 70 in Russia.

During the fight, the American got the snot beaten out of him. Battered and bruised, it was a one – sided mauling by the Russian fighter. However, Ruiz wouldn’t have expected that the lopsided affair would actually serve his purpose. After the fight, Putin apparently wired $ 150,000 to Ruiz, probably for being victimised by Shlemenko.

You can read the entire story here, which makes for a fascinating read. 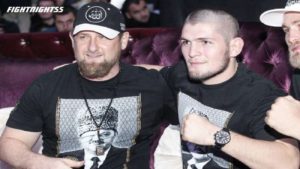 Much like Putin, Ramzan Kadyrov is a volatile character. Kadyrov has been accused of torturing and killing those who went against him and his regime. The current Head of the Chechen Republic recently came under heavy criticism and faced the ire of officials and people from around the world, when reports started surfacing online that gay men in Chechnya, were being detained, and a few even executed!

Saying that, Kadyrov has been one of the biggest proponents for MMA in Chechnya. Kadyrov started Akhmat Fight Club, and oversees multiple wrestling/MMA events. The oligarch is close friends with numerous Russian fighters in the UFC, including a certain Khabib Nurmagomedov, and dabbled in boxing himself. 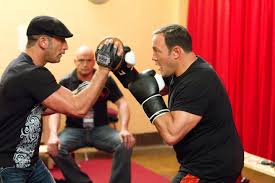 Looking at Kevin, not many would believe that the comedian is a big fan of Mixed Martial Arts. However, during his high school days, Kevin reached the number one spot on his wrestling team. A serious back injury ended James’ wrestling days abruptly, but that hasn’t stopped him from closely following the sport.

James trained in MMA alongside the likes of Randy Couture, and has helped the sport and the fighters in reaching out to a wider audience. In one particular episode of The King of Queens, UFC fighters, including the likes of ‘Rampage’ Jackson and Dan Henderson made special guest appearances. James also integrated MMA in one of his films – Here Comes the Boom, which was released back in 2012. 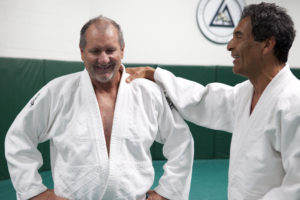 While Ed O’Neill made a name for himself as the rugged family man from Modern Family, the actor happens to be one of the biggest fans of the sport. Ed was also nominated for two Golden Globes, three Primetime Emmy Awards and four Screen Actors Guild Awards; however, his most cherished achievement was earning a black belt in Brazilian Jiu – Jistu back in 2007!

Ed trained in BJJ for 22 years, under the mentoring of Rorion Gracie! He was introduced to BJJ by his friend and writer/director, John Milius. 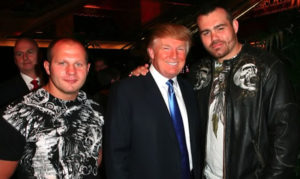 One could also argue that without Donald Trump, MMA wouldn’t be what it is today. When the fight capitals in the United States didn’t let MMA promotions come anywhere near them, it was Trump that welcomed the UFC to the Taj Mahal casino in Atlantic City, back in 2000!

Trump’s association with the sport of Mixed Martial Arts didn’t end there. Trump purchased a significant stake in Affliction Entertainment. Trump’s contribution to the growth of UFC and MMA led to Dana White speaking at the Republican National Convention. Dana White also summed up Trump’s role in the evolution of MMA.

“The Trump Taj Mahal was the only venue that would take us and accept us at the time. … [Trump] saw this thing before anybody else did. A lot of people want to jump in after and everybody tries to throw money at it … but this guy saw it before anybody did.”