Thiago Santos releases a statement following his loss to Glover Teixeira, and says he is extremely disappointed with his performance. 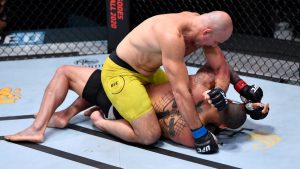 Thiago was back in the Octagon after a 16-month layoff due to surgeries in both knees. He last fought in July 2019 against Jon Jones, and lost after a close split decision. Before that, he took on the current Light Heavyweight champion Jan Blachowicz and knocked him out in the third round.

At UFC Vegas 13, Thiagos fought against Glover Teixeira in the main event, where he dropped the veteran early in the first round, but could not make it to the finish. Glover picked up the pace in the second round, by the end of which he had Thiagos in a rear naked choke. Santos was released by the bell, but Teixeira managed to get him in that position again in the third round.

Overall, Thiago looked good fighting against a highly motivated guy like Glover Teixeira who is at the tail end of his career, and still on a 5-fight win streak. However, he was disappointed with his performance and took to twitter to release a statement:

“I’m totally disappointed and embarrassed by my performance, I didn’t do anything I trained, I choked, I wasn’t the fighter I am,” Santos wrote in Portuguese. “I apologize to my coaches and team and thank everyone for their effort, you’re great. Thank you all for always being by my side. I’m sorry for letting you down this time. Thank you God for absolutely everything in my life. I’m more than blessed and I don’t even know if I deserve so much, my faith in you is unshakable.”

Where does Thiago stand now in the division:

A win against Glover Teixeira would have made his chances better for a title shot, but his performance put him back at the same spot in the division. Glover Teixeira asked Dana White for the title shot against Jan Blachowicz in his post0fight interview, and said why he deserved it. Blachowicz is however set to fight Israel Adesanya, who is moving up from Middleweight.

Thiago will have to wait now for a longer period to take over an opponent in the top five.