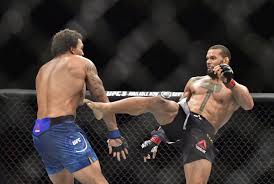 Thiago ‘Marreta’ Santos knocked out Eryk ‘Ya Boi’ Anders in emphatic fashion in a back and forth main event at UFC Fight Night Sao Paulo. Both Santos and Anders moved up a weightclass to the Light Heavyweight Division to replace the injured Glover Teixeira and Jimi Manuwa. Anders replaced Manuwa on 6 days notice and was finished by elbows at the end of the third round.

It has been reported that Thiago Santos injured his thigh eight days before the fight, according to his coach Tata Duarte. In his last sparring before the fight, he suffered an injury while going for a suplex.

He went down in pain,” Duarte said. “We stopped training and sent him to our physical therapist Bernardo Moura to check him out and start the treatment. Bernardo knew the injury, it was the same one he had in Brasilia against Spicely, but it was worse against Spicely.

“Bernardo said that the ideal would be two weeks of recovery, but we only had one. We did physical therapy for three days and went to Sao Paulo on Sunday. The UFC sent their physical therapist, Bob, on Monday and we kept the treatment.”

Santos did not consider pulling out of the fight even in serious pain and did not prepare for the late change in opponent.

“He didn’t train much during fight week,” Duarte said. “We were afraid of that, being a five-round fight and not being able to train. We only did 20-minute training sessions, only using his hands and the right leg because the left leg was injured.

”When the opponent changed, we couldn’t work his takedown defense, nothing, and we were worried because we knew Anders would try to take him down. There were moments in the fight that ‘Marreta’ gave him the takedown to avoid forcing the injury, but thank God everything went right.”

Previous articleUFC: After submission loss, Ben Saunders goes backstage to learn from the man who tapped him out!
Next articleTyron Woodley hopes Conor wins, so that he can smash him