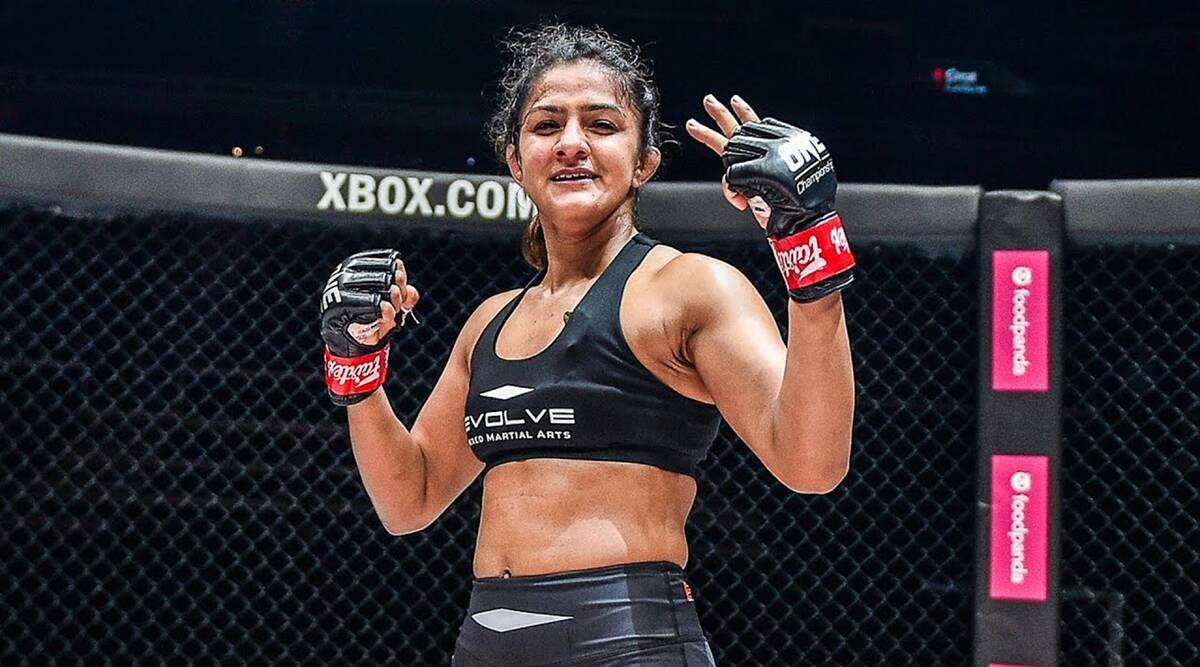 Ritu Phogat will face Thailand’s Stamp Fairtex in the ONE Women’s Atomweight World Grand Prix Championship Final at ONE: WINTER WARRIORS on December 3

Following her incredible victory over the Philippines’ Jenelyn Olsim in the ONE Women’s Atomweight World Grand Prix semifinal last October 29 at ONE: NEXTGEN, 27-year-old Ritu ‘The Indian Tigress’ Phogat is now ready to face her ultimate challenge in this prestigious tournament.

The No. 4-ranked atomweight Phogat is scheduled to face former ONE Atomweight Muay Thai and Kickboxing World Champion and current No. 2-ranked atomweight contender Stamp Fairtex of Thailand in the ONE Women’s Atomweight World Grand Prix Championship Final. The bout takes place at ONE: WINTER WARRIORS, live from the Singapore Indoor Stadium on Friday, December 3.

Phogat plans to leave no stone unturned in preparing for this matchup.

“I’ve been focused on the finals for a very long time and I’ve trained for countless hours for the past two years. Victory is closer than I can imagine and I plan to grab it with both hands. This match is crucial for my career and India’s reputation. India has never had a female MMA champion in the past and now I have the power to change the narrative and place an Indian woman on the global MMA stage. I will try my best to make India proud,” said Phogat.

Her opponent, Stamp Fairtex, is widely regarded as the most dangerous striker in the ONE Championship atomweight division. Sharing her thoughts on how to deal with such an opponent, Ritu Phogat said:

“Stamp is definitely a formidable opponent but she doesn’t have the kind of wrestling experience and background that I have built over the last seven years. I am certain that my superior wrestling background will give me an edge. Also, I’ve been training extensively and pushing through my wins and my losses, and I plan to make 3rd December an extraordinary match in MMA history. My improved striking capability and game plan will be on display for everyone to see inside the circle. I assure you that this match will be the watcher’s delight and a dreamer’s archetype. Hopefully, I will be spoken about as the first Indian woman to breakthrough on the global MMA stage.”

The importance of the matchup cannot be overstated, which is why Ritu Phogat is pushing herself to the limit in her training camp.

“It is always effort over excuses for me. Every match and every opponent comes with a different set of challenges, for which I train hard. When I am at the gym training for 5 or 6 hours, all I am thinking of is sharpening my skills so that I can beat my opponents, no amount of sweat or fatigue can interfere or deter me. I can’t sit until I sweat, for me the grind leads to growth. The harder I train, the more fuelled up I am! I feel restless if I haven’t trained enough.” 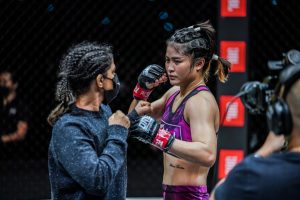 Of course, having trained at Evolve MMA in Singapore for the past few years, being away from home and her family in India has been difficult for Phogat. She constantly misses her family.

“My father and my family have been my biggest support. They have helped me remain focused on my goal, and they keep reminding me about why I left home to live in Singapore and train so hard. My father keeps insisting that I should compensate for my training for the next 3 months in the next seven days in the lead up to the fight. He always says grit, gallantry, persistence and integrity is the most time-tested route to success and I stick by that. If you work hard nothing can work hard against you! This time when I come home, I aim to land with the championship belt in hand and show the world what I am capable of. And then eventually, everything will be worth it, all the hard work, sweat, blood and tears will have been for something.”

Ritu Phogat is a big believer in HARD WORK

When asked for a message she would like to impart to the younger generation of athletes, Phogat’s message was simple.

“There is no shortcut to dedication and hard work. Even when I moved from wrestling to MMA, my father said to me that no matter what sport you take up, give it your best and dedicate yourself to it.  It doesn’t matter what type of sport you choose, just work on being the best at it. So that’s the wisdom I want to pass on to all the youngsters out there. Don’t be shy to put in all your strength and effort. Eventually that is what will count and show results. I would also like to appeal to the government to take steps to recognize MMA as a sport and give it the support it needs in India. I’d be happy to make personal contributions towards this myself. MMA athletes need to be recognized at large-scale platforms to inspire the next league of champions. There are phenomenal fighters out there who are still unsung and are short of an opportunity to win accolades, love and hearts – both locally and on international frontiers.”

On her response to praise coming from MMA superstar Conor McGregor, who praised Phogat on social media, Ritu Phogat said:

“I was thrilled and extremely elated to be praised by him. It gave me more confidence to show what I am capable of, in the circle. When Conor McGregor gets back after his recovery, he will still be a champion as he has always been and will be!”

On a lighter note, when asked what scenes from her life she would like to prominently showcase if a biopic were to be made, Phogat steadfastly said:

“When it comes to sports, people only see the glory and the laurels. But I would want people to know that behind all the glamorous success is years of hard work, sweat and tears. It takes sheer grit and determination to be successful, and there is no glossing over this. You cannot sugar coat the difficult days spent in grueling training or the nights of feeling low after defeat.”

ONE: WINTER WARRIORS will broadcast live from the Singapore Indoor Stadium on Friday, December 3. In the main event, ONE Lightweight Kickboxing World Champion Regian Eersel defends the belt against Russian sensation Islam Murtazaev.

Full Card for ONE: WINTER WARRIORS

Previous articleMichael Chandler praises Conor McGregor: ‘Anybody who discredits Conor McGregor for losses is ‘a casual or a Conor hater’
Next articleJustin Gaethje wants to win the lightweight title and make his first title defense against Islam Makhachev