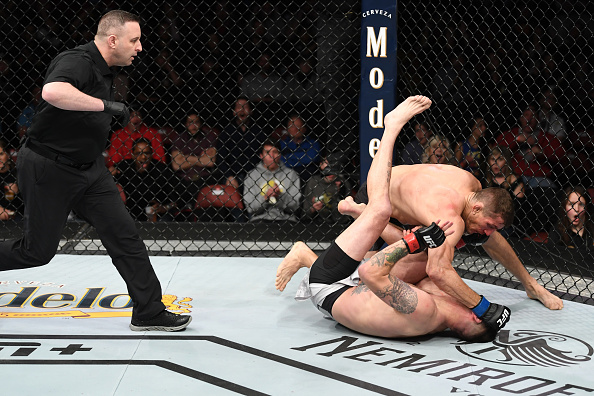 When UFC fighters enter the Octagon, there is always a chance that they may not leave in the best condition. They put their bodies on the line, as they fight an opponent looking to move up the ladder in the company. One such fighter at UFC Wichita was Tim Means.

Tim Means faced Niko Price at UFC Fight Night 146 in Wichita, and true to his words he left everything in the Octagon. However, he was unsuccessful when Niko Price caught him with a huge right hand. The shot sent him crashing to the floor in the first-ever KO loss of his 41 fight career.

However, more than that, there was something more troubling him. On his way down, his foot got caught, leading to a badly broken ankle.

The pain from his loss and ankle break might be a lot to put up with, but Means managed to muster a smile in his Instagram post. Also in the post, he managed to give an update about his ankle.

In the post, he would talk about the injury and also reveal that it required surgery.

“I do my best to leave it all in the ring everytime out so the fans can get what they paid for. Wasn’t my night I have to get surgery broken tibula and ankle. Niko caught me with a punch and my foot got stuck under me. Much respect to @hybridufc. See y’all down the road. Thank you to everyone for the kind words.”

This means that Means will require time to make it back from this sort of injury. It could be a while before he steps into the Octagon again.