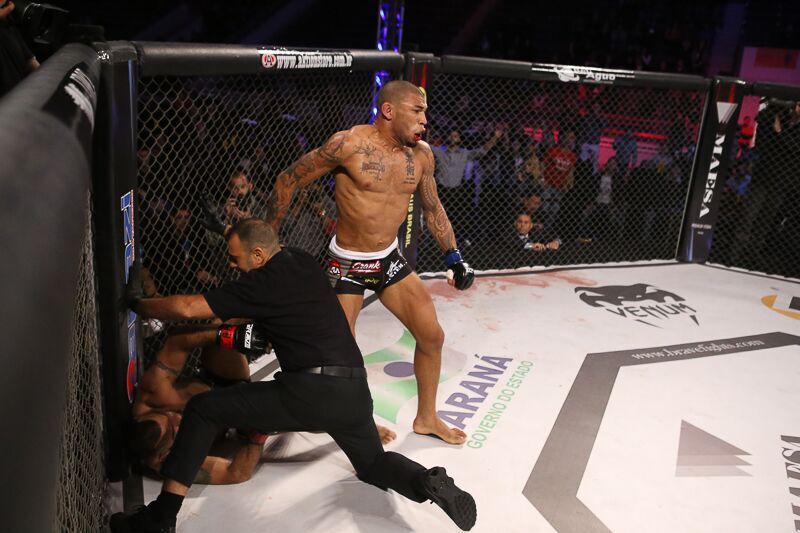 After receiving prestigious Brazil’s Fighter of the Year award in 2016, “Miau” signed for Brave and, earlier this year, was included in leading MMA magazine Fighter’s Only list of prospects for 2018. The striker now faces the biggest challenge of his career with the veteran “Mineiro” looking for a second Brave win. However, Santiago says he will get the finish no matter where the fight goes.
“I didn’t showcase much of my jiu-jitsu game in my two fights for Brave. But I’m constantly training and trying to get better. My head coach is Cristiano Marcello, so I know I can submit my opponents as well as knocking them out. I don’t really have too much to say about Lucas, but I know that I’ll get the finish wherever the fight takes place”, guarantees Luan, who praised his training partners and coaches at CM System.
“Man, I have to say training is awesome for this camp. I’ve been correcting my mistakes and getting even better in areas where I already felt really comfortable. My partners are making sure I’m battle-ready and I also have to thank my coaches for all the hard work they are putting in for me”.
Before getting his interim title shot, “Miau” wanted to fight linear champion Ottman Azaitar. However, the fight didn’t come to fruition. The Brazilian considers himself the “real Brave champion”.
“There’s no “if” for me. I know I am the champion. I’m sure of it. I’ll be there to collect my belt on April 13th. Being a champion for Brave will be amazing for my career, since it’s a great event, with a big name in the MMA world. This will be a great step for me”, says “Miau”.
Brave 11 is set for Belo Horizonte, capital of Minas Gerais, and will mark the third promotional event in Brazil. Back in March of 2017, Brave 3: Battle in Brazil took place in Curitiba, with the city also hosting Brave 8: The Kingdom of Champions, the first time two Brave champions were crowned in the same night.

Previous articleUFC: Paddy Pimblett refuses to fight at UFC Liverpool
Next articleUFC: Miesha Tate saves her dog from an attack