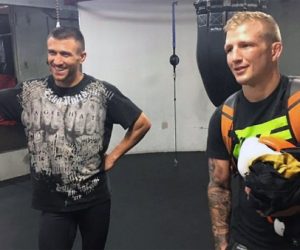 T J Dillashaw is on the verge of making history when he fights Flyweight champ Henry Cejudo for the 125lbs title on January 19 as the headliner of UFC Fight Night 143.The Bantamweight champ is on a 4 fight winning streak and won the title on November 2017 against Cody Garbrandt and defended it successfully on a rematch with Garbrandt this August.

Earlier this weekend boxing superstar Vasyl Lomachenko won the WBO lightweight title against Jose Pedraza by a dominant unanimous decision .With this victory Lomachenko has finally won the prestigious WBO title along with the WBA one which he won May 2018 against Jorge Linares via TKO.

TJ Dillashaw who previously had trained with Lomachenko to sharpen his boxing skills has pretty impressive words for the Ukranian boxer.

TJ congratulated the boxing phenom Lomachenko on Twitter on him winning the two belts and said that he is also going to achieve his own dream of winning too belts soon.

The two of them trained together in March 2017 in California and had a 4 round sparring session between them.Dillashaw cleanly stated  that although he had got his ass whooped by Lomachenko in sparring yet he was able to cherish the learning experience and again hopes to work with Loma in the near future.