TJ Dillashaw may get immediate title shot according to Dana White 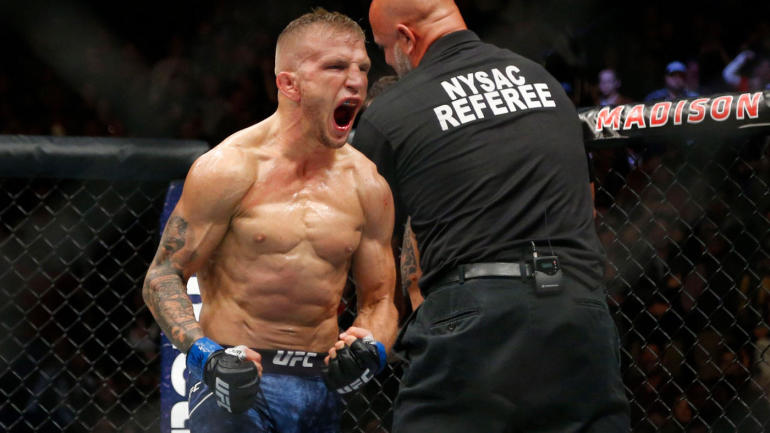 Former UFC bantamweight champion TJ Dillashaw may get an immediate title shot as his suspension ends later this month according to UFC president Dana White.

TJ Dillashaw has been serving a two-year suspension given by USADA for knowingly doping ahead of his fight against Henry Cejudo at UFC’s inaugural event at ESPN+. Dillashaw tested positive for recombinant human erythropoietin (EPO).

Will TJ Dillashaw get a title shot right away?

Speaking to ESPN, UFC president Dana White stated that he hasn’t ruled a potential title shot for Dillashaw in his comeback fight.

“We gotta talk to him about that. He would know the answer to that question better than we would,” White said.

Meanwhile, last month while speaking to ESPN, TJ had already made his wishes clear. He stated that he was going to fight for the title right away as he never lost his bantamweight championship.

“I want that title fight right away,” Dillashaw told ESPN. “You’ve got a guy in Petr Yan who beat someone for the belt that is 0-2 in the division. Jose Aldo has two losses [at 135 pounds]; you beat him for the title and you’re calling yourself a champion? That belt has changed hands every fight. No one there has dominated. That’s my belt, and I want to come back to a title fight.”

He also stated that he wouldn’t mind fighting former contender Urijah Faber. The pair had a falling out in 2015 and there has been a talk about the pair fighting ever since.

Meanwhile, the current bantamweight champion Petr Yan is set to defend his title against Aljamain Sterling at UFC 259 scheduled to take place on March 6.