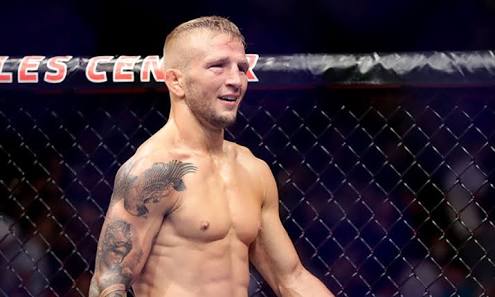 The card was headlined by a super fight between flyweight champ Henry Cejudo and bantamweight champion T.J. Dillashaw for the flyweight belt. Dillashaw stepped in as a heavy favourite in this highly hyped matchup. 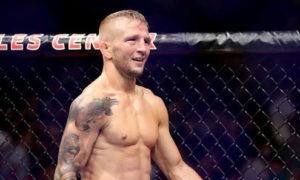 However Cejudo had different plans. Cejudo came out guns blazing and absolutely ran through Dillashaw to continue with the trend of a smaller fighter winning in super fights. The fight was as long as it lasted, paid justice to the build up. However the fight caught some heat for the result, a probable early stoppage.

Speaking at the post-fight press conference, a gutted Dillashaw addressed the issue.

Sucks to have it stolen from you,” Dillashaw, responding to MMAjunkie, told reporters at the post-fight news conference. “I worked my butt off. It would be nice to actually get the chance to show it. It’s a title fight. It’s a champ-vs.-champ fight, and you’re going to stop the fight like that? I’m in on a single leg. (The referee) said, ‘Hey, show me something.’ I said, ‘OK.’ I’m on a single leg in a scramble, (Cejudo) stops punching, he’s defending a single leg, and (the referee’s) going to stop the fight? It’s just ridiculous. It’s pretty pathetic that I have better knowledge (than the referee).”

Dillashaw was dropped with a huge overhand right from Cejudo which had him on the canvas, clinging on Cejudo. Cejudo however landed another massive shot to floor Dillashaw and threw some punches to seal the fight. Dillashaw however claimed he was defending himself intelligently.

Right off the back, Cejudo agreed for a rematch at bantamweight. However, Dillashaw wants to keep the variables same and have a rematch at flyweight.