TJ Dillashaw’s weight is on point; plans to be the first to weigh in 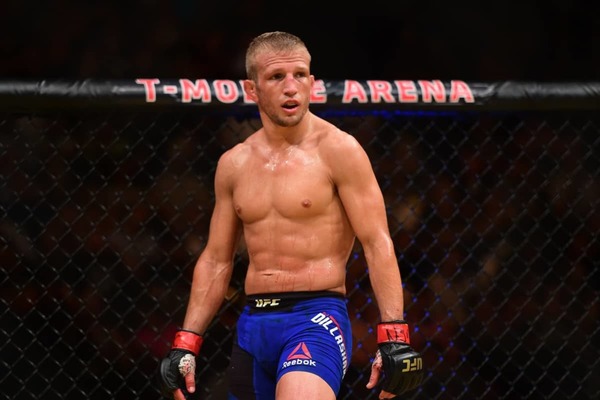 TJ Dillashaw is attempting a huge change ahead of his fight with Henry Cejudo for the UFC Flyweight Championship. The UFC Bantamweight Champion is trying to bring his weight down to Flyweight with a drastic weight cut. Coming down to 125 pounds was an enormous goal to meet for the fighter, but he appears to be on course to do that.

The update regarding the UFC Fight Night 143 weigh-ins saw TJ Dillashaw working till 1 AM on a weight cut session with his team. According to an update, at 1 AM, he only had a small dinner and drank a little water and his weight was on point. What’s more, according to the update, his goal was to be the first to weigh-in at 9 AM on the next day.

It’s nearly 1am in New York. TJ Dillashaw and his team just wrapped a weight cutting session at 24-hour fitness. He will only now eat his dinner for the night and drink some water. Everyone is very positive on where he’s at ahead of tomorrow. pic.twitter.com/PwbhWTCCt5

The drastic weight cut that Dillashaw went through saw him cut a huge amount, as he was at 138 pounds 9 days before the weigh-ins. If he were to be successful he would have to cut a total of 11 pounds in only 9 days.

One note to add, it‘s TJ’s goal to be the first fighter on the scale tomorrow morning at 9am.

The fight between Henry Cejudo and TJ Dillashaw is extremely important, given that there are rumours of the UFC Flyweight Division’s future depending upon it. If Dillashaw were to win, he would become the fourth fighter in the UFC to have held the titles of two divisions simultaneously, joining the ranks of Conor McGregor, Daniel Cormier, and Amanda Nunes.