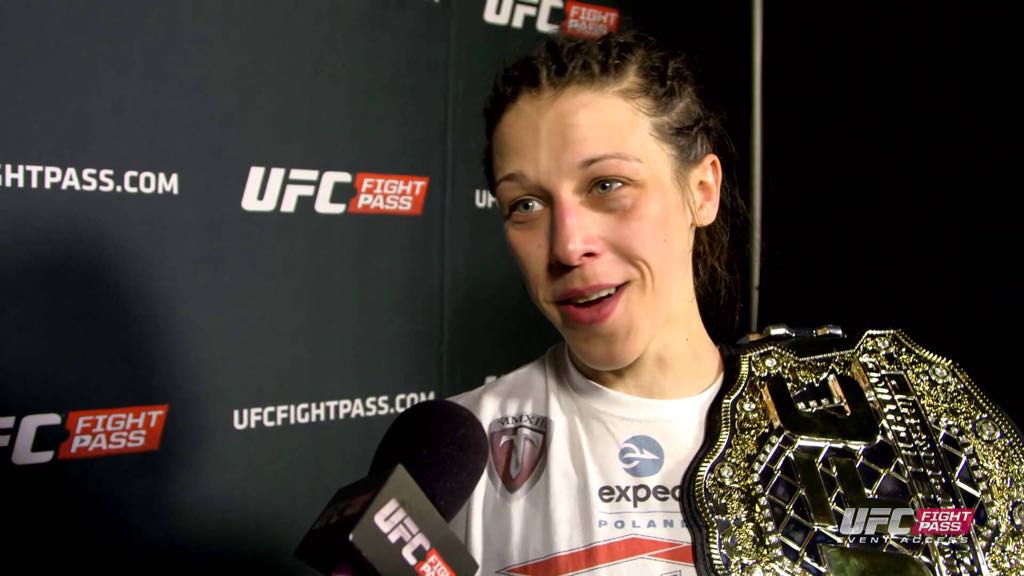 Two years ago, at UFC 185 we witnessed the title belt change hands from the newly crowned Strawweight Champion Carla Esparza to title challenger Joanna Jedrzejczyk. It was the most dominant win of the night from a seemingly underdog Joanna, whom many doubted going against the champ. Joanna won her previous fight via a split decision against Claudia Gadelha. Many believed the decision was not fair and Claudia should have been the title challenger – marking the beginning of a new rivalry in the division.

Carla’s intentions were clear – take the fight to the ground from the start. But her relentless takedown attempts were being answered by Joanna’s improved ground defence. Out of eight attempts, Carla managed to take Joanna down only once. Joanna began finding her range with perfectly landing combinations. Joanna completely mauled the champion with her impeccable striking and perfect takedown defence. Carla’s 6 strikes were of no comparison to Joanna’s 55 hard hitting strikes. Joanna won the well deserving performance of the night award and there began a four-fight winning streak which were all title defences.

With her dominant win, Joanna made a huge statement – the belt is going to stay with her for a very long period and it’s not going to be an easy job derailing her.

Joanna continued her dominance in her first successful title defence with a TKO victory in the third round. This was nothing short of a one-sided beat down by the champion. At this point it was clear that there was no one in the weight class to match her.

Valerie was a game opponent whose toughness was no match to the previous opponents Joanna faced. Despite her toughness and the fight going the distance she fell short and Joanna proved why she was the multiple times kickboxing champion.

The much-anticipated rematch everyone was waiting for did not disappoint. This was another brilliant performance by the champion who clearly won a unanimous decision against her nemesis. Joanna’s five round fighting experience proved to be the game changer as Claudia started to ware off in subsequent rounds.

If there was anyone who could have pulled off the win against Joanna, it would have been Karolina Kowalkiewicz who came so close to finishing the fight in the fourth round. Joanna was in no mood to relinquish her title to her undefeated fellow Polish fighter and proved why she is the undefeated queen of the strawweight division.

No other strawweight could make an impact like Joanna, and her fights speak volumes about her indominable fighting spirit. With her next title defence scheduled against a hard-hitting Jessica Andrade at UFC 211 on May 13, Joanna promises to make history by defending her belt for the fifth time. Joanna believes she is the pound-for-pound best fighter, and with her win against Jessica Andrade at UFC 211, she wants to seal the no. 1 spot on the overall pound-for-pound rankings. Will her undefeated reign continue this summer or will we see a new champion emerging? Whatever be the outcome, this matchup has performance of the night written all over it.

Previous article
Gastelum gets Anderson at UFC 212
Next article
How MMA has evolved, continues to grow in popularity and break records – Part 2