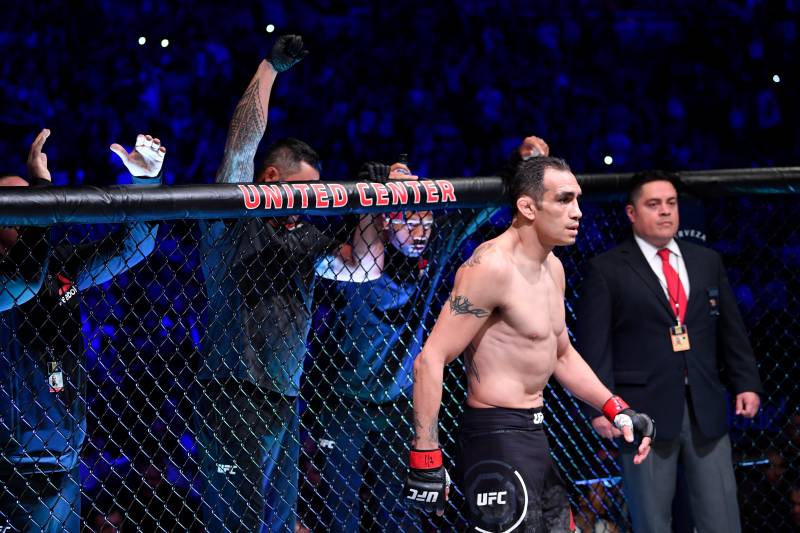 Tony Ferguson is the next definite contender for a shot at the lightweight belt. However, ‘El Cucuy’ has now come out to challenge not the 155 pound champ in Khabib but the light heavyweight champ Jon Jones.

Ferguson, in a tweet, tried to make Jones remember the time when he moved up two weight classes to challenge him. He also said that he will be more than happy to run it back again once more with ‘Bones’.

Lot Of Shit Talk @JonnyBones You Wanna Play Again Like We Did In College? I Bumped Up Two Weight Classes & I’ll Do It Again 🌱 Growth. You Wanna Play Chess I’ll Be Your Huckleberry. Got You In 2 Neanderthal, Talked To Your Pops He Knows Who’s Champ. # Anklepick # DavidVSGoliath pic.twitter.com/VaGUrm25OX

You Wanna Play Again Like We Did In College? I Bumped Up Two Weight Classes & I’ll Do It Again

You Wanna Play Chess I’ll Be Your Huckleberry. Got You In 2 Neanderthal, Talked To Your Pops He Knows Who’s Champ. # Anklepick # DavidVSGoliath

Ferguson and Khabib have cleared out the entire division all by themselves. Both of them have big win streaks credited to their names making a potential showdown between the two a potential super fight. However, the fight has failed to happen for four times in the past. UFC President, Dana White has even went on record saying that he isn’t going to book a match-up between the two. However, the only reasonable fight left for Khabib is Tony Ferguson.
Ferguson has teased a return back to the Octagon in an Instagram post just a while back. It was reported that he wanted to fight Khabib at UFC 245 scheduled at the end of the year. However, it was later confirmed that Khabib only wanted to fight by March or April of 2020.
Jones, on the other hand, is holding a Khabib-like monopoly over the light heavyweight division. Since his return, he has captured the title and defended it multiple times. However, in his last fight he came very close to losing the belt against Thiago Santos. Lately he has been cooking up a beef with the middleweight champ Israel Adesanya. Plans for his move up to heavyweight have also been hovering about for quite some time now.