Tony Ferguson predicts that he would ‘easily break’ Conor McGregor 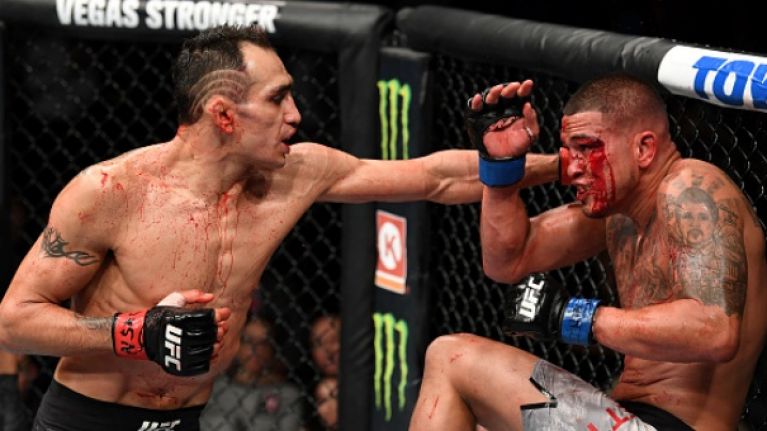 Tony Ferguson continued his winning streak last month against Anthony Pettis on the co-main event of UFC 229, he was also coming off of a knee surgery, but he still managed to beat Pettis. He is currently on an 11 fight winning streak and it doesn’t look like he is slowing down anytime soon. He last lost a fight in 2012 and has been undefeated for six years.

He now has predicted that he would easily beat former UFC champion and Irish star Conor McGregor in a cage or in a boxing match. He posted this on Twitter late on Tuesday night.

I feel I do my best against “Southpaws”. Most of my finishes are against them w/ style points. I feel if I were to fight @TheNotoriousMMA in a cage or boxing match my “Athleticism” & “Conditioning” would be too much for the Irishman & he would easily break in a Few Rounds 🇺🇸🏆🇲🇽

“I feel I do my best against ‘Southpaws,’” Ferguson said on Twitter (edited for clarity). “Most of my finishes are against them with style points. I feel if I were to fight [Conor McGregor] in a cage or boxing match my athleticism and conditioning would be too much for the Irishman & he would easily break in a few rounds.”

It goes without saying that Conor McGregor has the best boxing in the world of mixed martial arts and he showed his heart in a boxing match last year when he went ten rounds with boxing legend Floyd Mayweather before getting TKO’d.

Previous articleUFC: Daniel Cormier has a prediction for Stipe vs Cain – no prizes for guessing who wins
Next articleUFC Newcomer Maycee Barber wants to fill in for Ostovich against PVZ