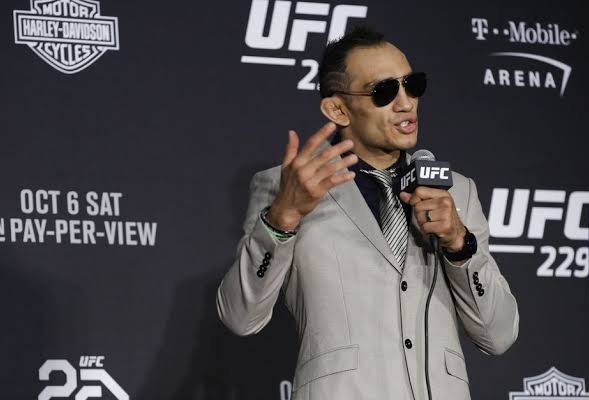 Tony Ferguson continued his winning streak last Saturday against Anthony Pettis on the co-main event of UFC 229, he was also coming off of a knee surgery, but he still managed to beat Pettis. He is currently on an 11 fight winning streak and it doesn’t look like he is slowing down anytime soon. He last lost a fight in 2012 and has been undefeated for six years.

“I’m the f—king champ, you guys realize that right? I’ve been the champ. I am the champ. You have those two knuckleheads over there making this sport look bad,” he said. “So when I had that media scrum over there and I yelled at all you guys, don’t be feeding that bullshit, straight up. I am the champ. I don’t have a belt up here. I don’t need to have a belt up here to be the champ, so if you guys want to feed that go ahead, put that in your pocket and take it with you.

“Khabib and I deserve to fight, we need to fight for the fifth time. We need to try this out again. Me as the champ. I was the interim champ. I’m still the fucking champ. There’s no BS in this,” Ferguson continued. “Conor does not want to fight me. I saw him when we were walking out the weigh ins. He walked up he did his strut and I turned around and he fucking stopped. He looked like a deer in the headlights. Nobody wants to be trapped inside that cage me. They don’t want to be cut by my elbows, they don’t want to get hit by any of my kicks and they don’t want their conditioning checked by me. I’m a different animal than these guys. They want to be animals inside there, I’m a dogcatcher guys. Alright? I got a noose for them.”

Both Khabib and Ferguson were booked to fight on four different occasions, but the fight never came into fruition.

Fireworks from Tony Ferguson and Anthony Pettis earns them FOTN