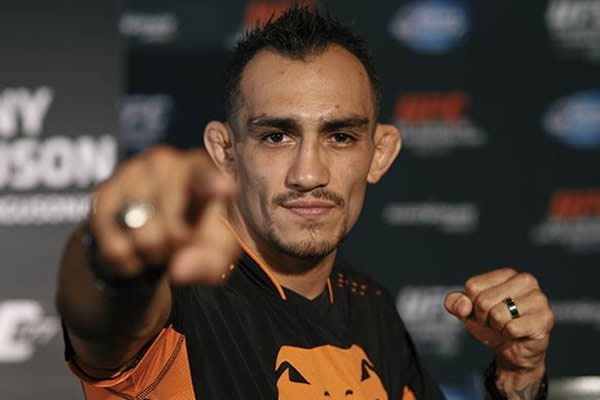 Khabib Nurmagomedov successfully defended his UFC lightweight title against Dustin Poirier at UFC 242 last weekend in Abu Dhabi. He won the fight in the third round via rear-naked choke.

However, former interim lightweight champion Tony Ferguson was extremely unimpressed with Khabib’s performance, he revealed in an interview with Ariel Helwani of ESPN.

“Lazy. One-dimensional,” Tony Ferguson said. “Nothing against him, both guys did awesome fight week. I know there was a lot of nerves and stuff. Khabib showed up, he obviously won. He put the pressure on Dustin and Dustin didn’t have an answer for it. Props to Khabib for winning but like I said, it’s lazy. We’ve prepared for this guy many times. He’s a good fighter but I know how to break that goat.”

“Well, being my type of fighter and my type of guy, you know I throw a lot of barrage of punches, kicks, knees and elbows,” Ferguson said. “So when I see someone pushing against the cage and not really doing too much, being active and just kind of putting themselves like a wet blanket. In jiu-jitsu, we use that saying. He’s a wet blanket, just sitting there. It’s a lot of pressure. When I fought Danny Castillo he did the same thing. It’s interesting how Khabib fights but to me it’s just boring, it’s lazy.”

He then revealed that he wants to fight Khabib Nurmagomedov later this year in December. UFC 245 takes place December 14 at the T-Mobile Arena in Las Vegas, Nevada.

“If I was in charge, we’d do this sh*t in December,” Ferguson said. “You know what, I’m calling it right now. We’re gonna do this sh*t in December. We’re gonna let Khabib go and eat his hamburgers with cheese and all the other bullsh*t – enjoy it, Fathead, don’t get too fat – you know I’m coming at you harder than Tiramisu Tuesday’s. It’s still there. It’s popping. I’ve got some new sh*t for you guys. I’m really excited.” Ferguson concluded. (H/T – MMAFighting.com)

Watch: Dustin Poirier to auction off his UFC 242 kit for the Pygmy people in Uganda

Previous articleThe Rock may wrap the BMF belt around Jorge Masvidal’s waist at UFC 244!
Next articleUFC: Dustin Poirier: I’m down but not out!