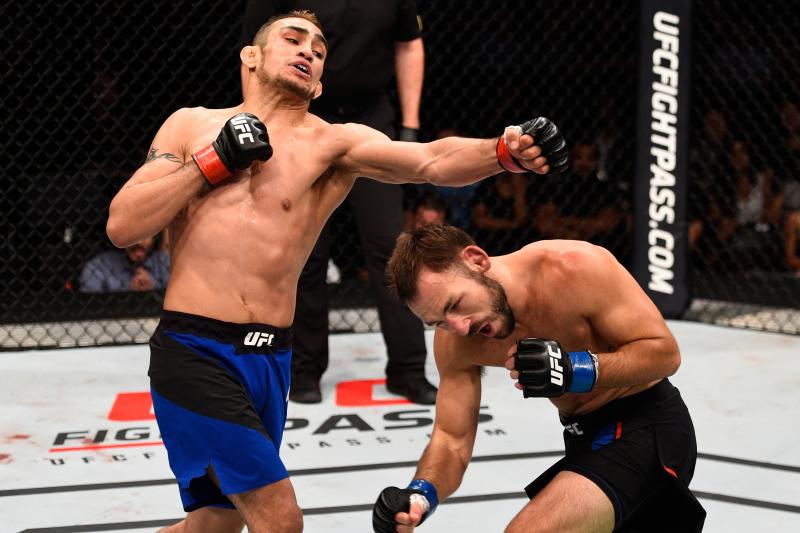 Two world class Lightweights will collide at UFC 223 for the Lightweight belt. Tony Ferguson and Khabib Nurmagomedov at UFC 223 will be a war & every fans of The MMA India Show & all over the world is waiting for that day. Both fighters are very dangerous & they were victorious from their last outings in the Octagon. Tony Ferguson, the current  UFC interim lightweight champion is ready to face Khabib Nurmagomedov & he is expecting a battle in that cage. Ferguson told on The MMA Hour,

“I get hit for a certain reason, I want people to use their energy against me. But for Khabib, that b*tch is not going to touch me,” Ferguson vowed Monday on The MMA Hour. “Not one time. I’m going to dance circles around this kid. I’m going to be hitting him with some nasty f*cking uppercuts that are going to make him think twice about shooting in on me.

“Have you ever seen Khabib cut in a fight? I don’t think so. I’m Mexican and I’ve got some f*cking sharp ass blades on my elbows, so that b*tch better think twice about f*cking showing his face in front of me, especially inside that cage. Get in my face, dude, I’ll hit you with my knee. I’m going to leave you f*cking bloody.”

“You’ve got to remember, I’ve prepared for this gentleman four times in a row,” Ferguson said. “This is going to be the fourth time. So I’m not that impressed with him. I wasn’t the first time I set eyes on his footage. I’m a wrestler and he has the hardest time beating wrestlers. Look at the hard time that he had beating Gleison Tibau, who just performed this weekend (at UFC 220) and just got knocked out.”

“I finished Tibau in the first round via submission. Khabib had to go all the rounds and he couldn’t take [Tibau] down. Now this might’ve been pre-USADA or whatever, but I’m talking techniques, man. He looked f*cking sloppy. And he looked so beat that he lost that fight, and that is the one fight that he lost in the UFC. So all you fans, go back and watch Khabib Nurmagomedov vs. Gleison Tibau and watch Tony Ferguson vs. Gleison Tibau, and you tell me the f*cking difference, who the champ is.”

“He had a decent performance but he didn’t leave any blood on him. And I finished Edson in the second round, all due respect to Edson; he’s a hell of a fighter. But [Nurmagomedov] had a hell of a time trying to take him down. It took me one time, got it done and moved on from there.”

“This is Rumble in the Bronx and I’m Jackie Chan. Let’s do this sh*t.”

“It would be nice to finish Khabib via liver shots, wouldn’t it? I just want to see him wincing in pain on the ground where he belongs,” Ferguson said.

“I’m going to f*cking go Mike Tyson on this b*tch. Go back and watch my old footage, man. Go back and watch my old fights. I knocked people out at 170 pounds. I’ve seen Khabib, I think he was wearing platform shoes when we were over there facing off. That dude has an issue if he’s trying to compensate like that, so he’s already lost. So I’m going to finish this guy in distinct fashion.”

“I’m not going to try to hurt him too much. I mean, I think we’re past that point of animosity where we needed so much anger to f*cking train for this. Hopefully, we can have some fun and be a little bit more lighthearted in camp so nobody gets injured. Please, AKA, don’t hurt your f*cking boy, because you guys are notorious for that sh*t, and show up and make some weight. I know you have the world’s best weight-cutting guy besides myself, because I’m number-f*cking-one. So show up, dude, do your sh*t, and let’s have a good fight.”

Previous articleDeiga-Scheck injured, out of Nawras Abzakh bout at Brave 10
Next articleUFC 220: The Thrill and the Agony – Sneak Peek