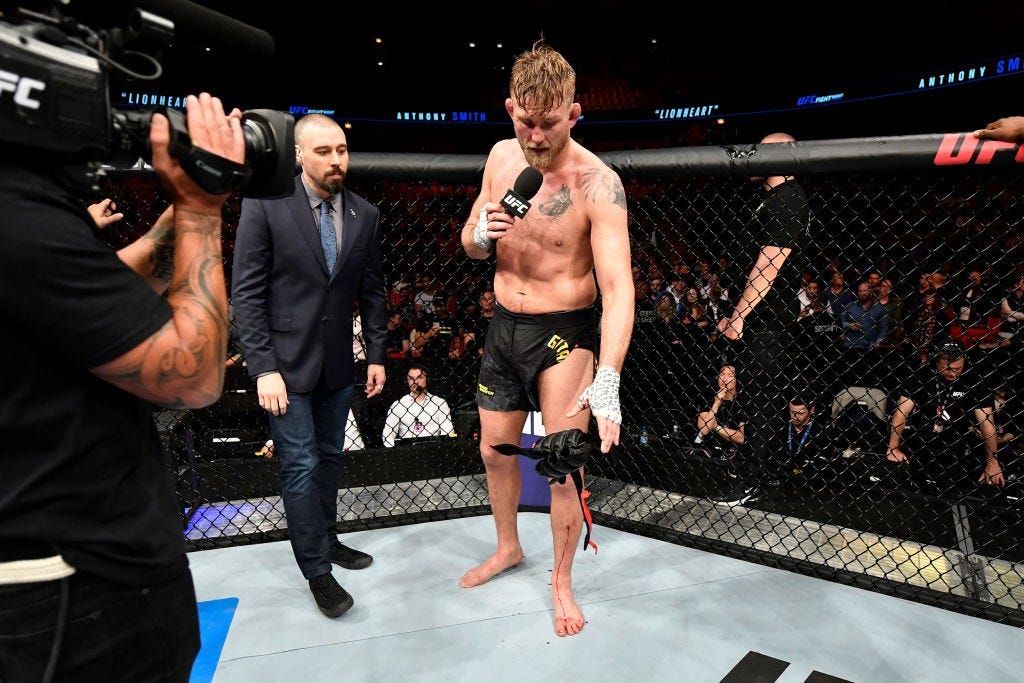 Former three-time title challenger Alexander Gustafsson suffered the second back to back loss inside the Octagon as he got submitted by Anthony Smith at the Ericsson Globe Arena in Stockholm, Sweden.

From the beginning of the fight, Smith was the most the aggressors inside the Octagon as he chased Alexander Gustafsson around the cage. In the first two rounds, Gustafsson showed his quick foot movement and kept Smith at bay with his kicks, but as the rounds passed Smith got frustrated and started throwing power shots, but they weren’t exactly landing cleanly as Gustafsson was dodging shots with his incredible head movement. 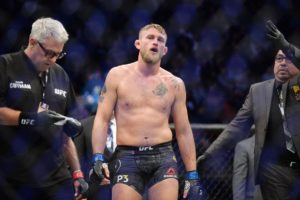 However, in the fourth round, as Gustafsson was advancing forward, he tried to take Smith down, but as they went down, Smith managed to fall on top of Gustafsson and then started landing heavy shots from the top, ultimately as Gustafsson tried to defend himself, Smith slipped his forearm under the chin and locked up the Mauler for the rear naked choke. He ultimately had to tap at 2:38 into the fourth round.

During the post-fight interview, Gustafsson revealed that he wants to retire as the show is over.

“I’m very disappointed,” Gustafsson said during his post-fight interview. “It happened again. I lost in my own home. But it’s a sport. You do it because you love it, and it is what it is. Lionheart Anthony Smith, he’s tough as nails and a great guy.

“I just want to thank you all for coming out this night and supporting all of the fighters here. Every time the UFC comes back, it’s a highlight and it’s amazing to be here and compete and hear the cheers.”

“The show is over, guys,” concluded Gustafsson. (H/T – MMA Mania)

Wow. Anthony Smith with a huge submission win over Alexander Gustafsson, in a fight his team really had to sell him on taking so quickly after Jon Jones loss. Smith was really upset with himself about Jones performance. This one should make him feel a lot better.

Alexander Gustafsson retires from MMA. Great time to do it. Hell of a career. Probably the fighter who has come the closest to winning a title without actually doing it. Farewell.

Alexander Gustafsson is the European Chris Weidman don’t @ me

"It has been an amazing rollercoaster. An amazing journey."

"I have everything in my life because of the sport and the UFC."

It's been a pleasure to watch you fight, Alexander Gustafsson 💙💛#UFCStockholm 🇸🇪 pic.twitter.com/CFXAMvALQ9

Alexander Gustafsson just laid down his gloves in the octagon. "The show is over, guys."

I want to say he just retired, though, when emotions run high after a fight, it's hard to say if that was really it.

Honestly I don’t believe you but if you’re serious, thank you for everything. You held the division to a standard and made us better. Go kick ass with that Family.

Congrats on a magnificent career @AlexTheMauler Incredible fighter and a true gentleman.

@AlexTheMauler a true #hero and a #legend in the sport! The first Swedish mma superstar. I thank you for all of your great fights 🙏

Congrats to @AlexTheMauler on an amazing career! Hate to see him bow out but have to respect when a fighter is no longer willing to make that walk. One of the greatest in and outside of the cage, he’ll be missed in the Ufc.