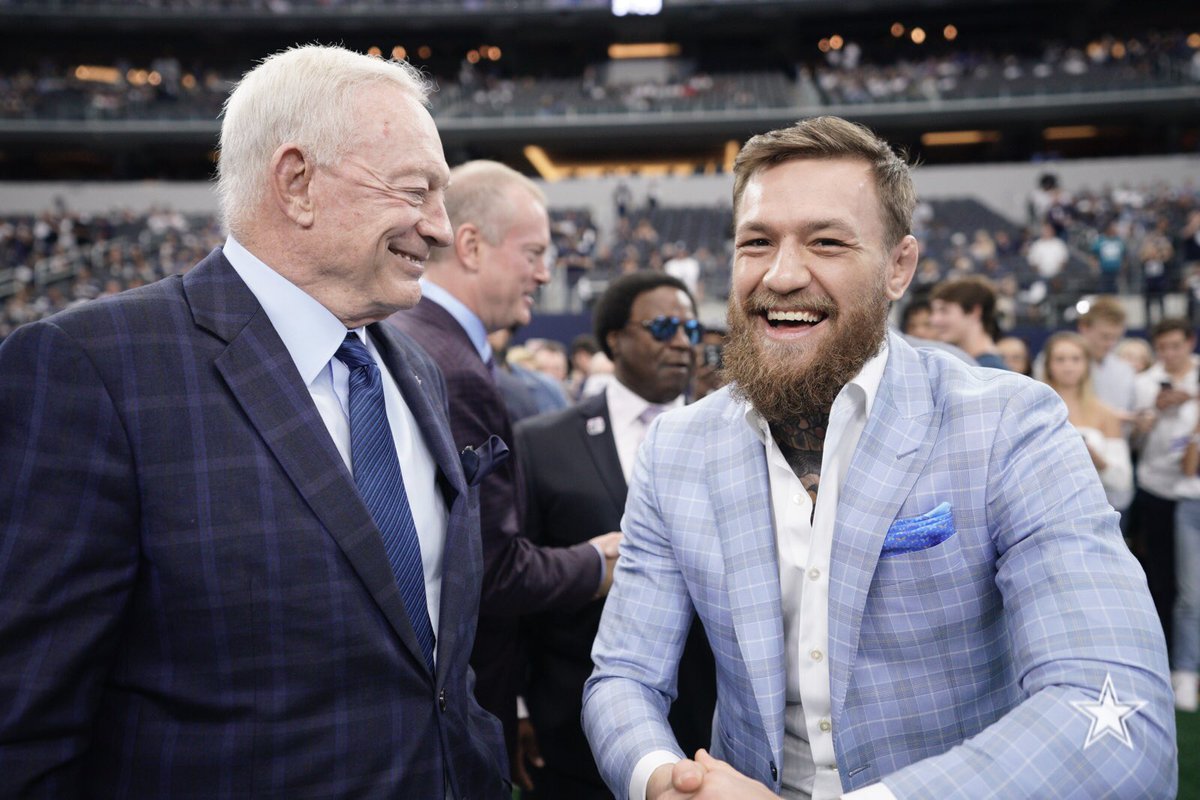 Conor McGregor might have lost the biggest fight of his career, but his spirit isn’t broken, just a week after his loss to Khabib Nurmagomedov, He was seen last night attending Dallas Cowboys’ Week 6 win over the Jacksonville Jaguars and spent quite a bit of time with Jerry Jones.

“The Notorious” was all over the FOX network pre-game coverage of the Dallas Cowboys’ home game against the Jacksonville Jaguars and he was also seen at the pitch with the players and was present there with his teammate  Dillon Danis and agent Audie Attar. 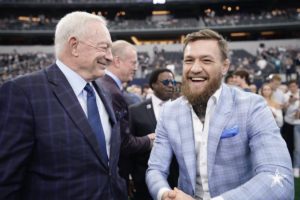 The Social Media was in awe and some even trolled McGregor:

Petition to have @TheNotoriousMMA at every cowboys game from here on out!!

An honour to be on the field here in Dallas, Texas supporting the @dallascowboys!
Proper 12 is everywhere out here and WE LOVE IT!
The Octagon is next. pic.twitter.com/48o57lRuqD

McGregor and The Proper do Dallas!@ProperWhiskey @dallascowboys
McGregor Productions. pic.twitter.com/HRzOwwcsiQ

Conor McGregor got HYPED pregame with the Cowboys 📈 pic.twitter.com/0GPAiAzfDv

NOTORIOUS @dallascowboys WIN! @LindsCashDraper & I are channeling our inner @TheNotoriousMMA for this postgame coverage😝 pic.twitter.com/PIFkxEWQKo

Dallas knows how to celebrate #BreastCancerAwarenessMonth. The love of this great city, along with the generosity of the Jones family & @TheNotoriousMMA were on full display at today’s @DallasCowboys game. @DCCheerleaders also wore pink in honor of all who fight cancer. #JAXvsDAL pic.twitter.com/ChQvsPF0Ib

Of all the celebrities we’ve had over the years on the @dallascowboys sideline, @TheNotoriousMMA Conor McGregor has created the most buzz!! pic.twitter.com/6uGAKg2cCi

This more than likely wasn’t merely Conor McGregor attending the Cowboys game for a bit of promo. I truly believe the possibility of him fight at Cowboys Stadium was discussed between himself, Jerry Jones and Rupert Murdoch. 100,000 fans would be insane. #UFC229 pic.twitter.com/QA8J1HkM8b