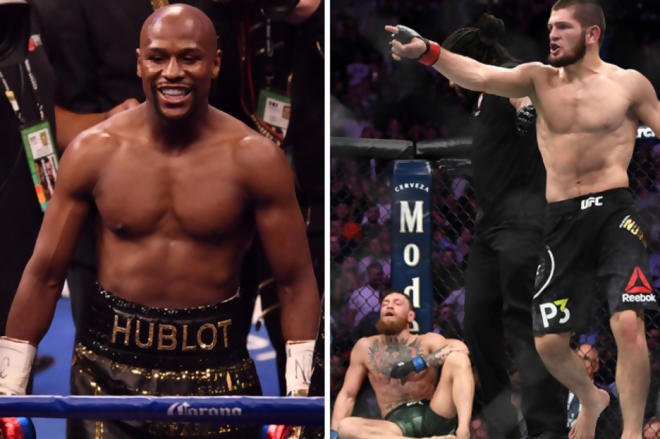 With a win over McGregor, he is a global star and has seen a tremendous increase in his fan base and over the weekend he was seen attending a WBSS fight between Zelani Tete and Mikhail Aloyan in Ekaterinburg, Russia. The fight featured TMT fighter Andrew Tabiti and to represent him CEO of Mayweather Promotions Leonard Ellerbe was also present. 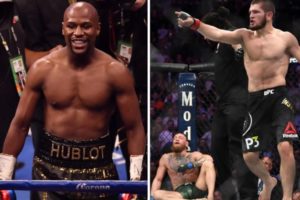 In the video, Khabib Nurmagomedov is seen challenging Floyd Mayweather:

“Let’s go Floyd, we have to fight now,” Nurmagomedov said. “50–0 vs. 27–0, two guys who never lose. Let’s go, why not? Because in the jungle, there’s only one king. Of course I’m the king because he cannot drop McGregor, but I drop him easily. Let’s go.”

Then Monday, Mayweather responded by writing on Instagram, “CBS, Showtime and MGM Grand get the checkbook out!”

Floyd Mayweather fought MMA superstar Conor McGregor last year which was a massive hit amongst casual fight fans and was the second biggest PPV event in the history of the sport. The fight topped 4.4 million PPV buys in North America and Floyd beat McGregor via 10th round TKO and earned $285 Million and was ranked #1 in Forbes rich list.

Social Media couldn’t stop talking about the fight and is already generating a lot of buzz amongst fans:

When you hear Khabib Nurmagomedov and Floyd Mayweather in the same sentence together. pic.twitter.com/utYYMGdKbp

Khabib lands one overhand right and all the sudden becomes the #1 challenger to Floyd Mayweather. Makes sense.

.@dc_mma says that “of course” a rematch will happen between @TeamKhabib & @TheNotoriousMMA. Says it will probably be bigger than their first fight. Says Khabib shouldn’t box against @FloydMayweather. #HelwaniShow @arielhelwani

Khabib Nurmagomedov is the latest non-boxer to say he fancies taking on Floyd Mayweather in a boxing match.

Who's next? Brutus 'The Barber' Beefcake? Ben Stokes? The fella who played Johnny in The Karate Kid?

The game is gone.

@floydmayweather But no Vegas, they won’t pay my money. https://t.co/xZkE2KUfaE

We're not doing this shite again are we? No MMA fighter beats Floyd Mayweather at boxing, period. No boxer beats a decent MMA fighter at MMA, period. https://t.co/MNzxpTeIPf