Amanda Nunes created history today as she becomes the first ever female UFC fighter to hold world titles in two weight class simultaneously. She knocked out featherweight champ Cyborg (20-2 MMA, 5-1 UFC) in the first round with a flurry of brutal and devastating punches.

It took Nunes about 51 seconds and now she has legit claim over calling herself as the Greatest Female fighter of all time. She ended Ronda Rousey’s career two years ago when she ended Miesha Tate’s career and now she ended Cris Cyborg’s reign and handed Cyborg her first loss in nearly 14 years. Cris Cyborg’s last career loss was back in 2005 and now Nunes claims her UFC title which she won back in July of 2017 by beating Tonya Evinger. 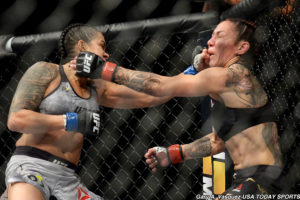 “When I signed the contract, I said this is going down,” said Nunes, who becomes the third overall UFC fighter to simultaneously hold titles in two divisions. “I’m going to be the first female two-division champ in the UFC. I told you I’m the greatest.”

“Now, Dana, I have to be in the Hall of Fame,” Nunes added to her post-fight speech.

Amanda Nunes is now the only female in UFC history to hold two belts at the same time. More importantly, I think she just became the greatest female fighter ever.

i never bitch about this shit, but the UFC has given Amanda Nunes close to zero publicity. if that KO doesnt change that, this shit is broke. #UFC232

Within a span of four weeks, Amanda Nunes and Nina Ansaroff pulled off two of the biggest upsets of 2018. What a month for that household. I love this crazy sport. #UFC232

So Amanda Nunes is the greatest female MMA fighter of all time.

Between Rousey and Cyborg, Amanda Nunes has singlehandedly killed the most valuable women in the sport.

Nunes isn't in the same marketing ballpark as either of those two.

Well, there's no argument any more. That monster of a woman, Amanda Nunes, is the greatest female fighter in MMA history. She destroyed Cyborg, Rousey, & Tate – arguably all top 5 women ever – like they were nothing.

I don't know if she's ever gonna get it, but Amanda Nunes deserves all the fame and all the money. That was outstanding.

I still can't get over the sack on Amanda Nunes. Not only does she agree to fight the most dangerous woman in the world, she eats shots from her, bites down on her mouthpiece and absolutely SLUMPS the GOAT. The SACK on that women my God. #UFC232