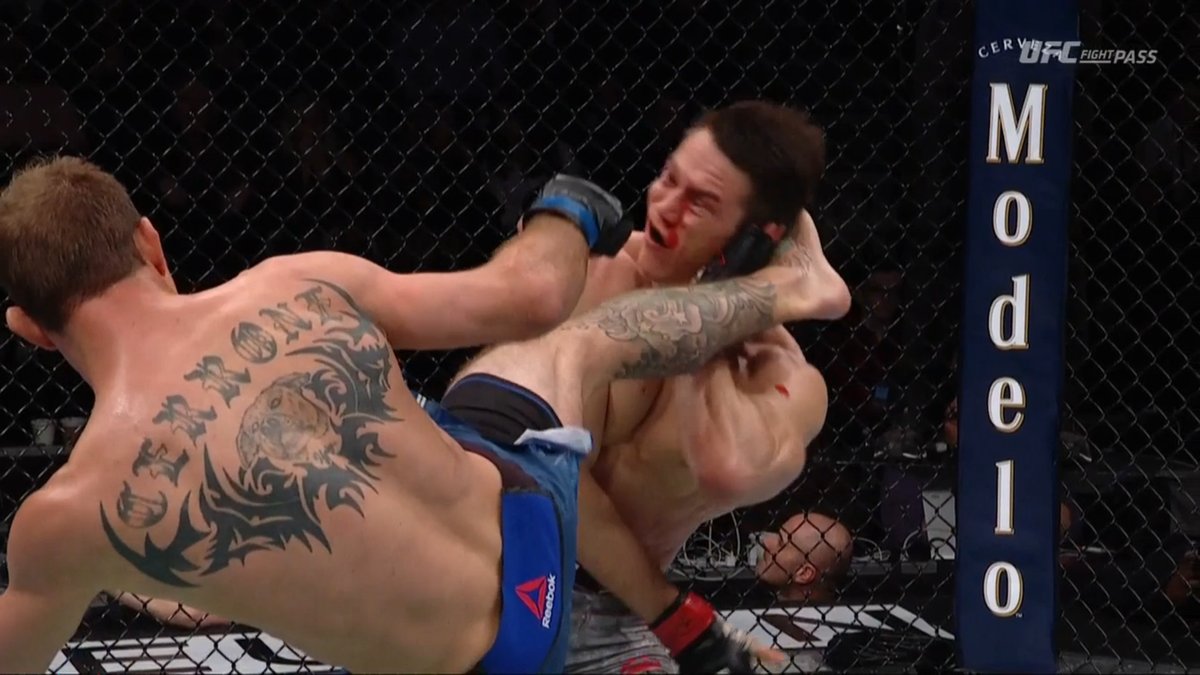 In the final prelims bout of UFC on ESPN+ 1 which takes place at the Barclays Center in Brooklyn, NY, veteran lightweight fighter Donald ‘Cowboy’ Cerrone put a brutal beatdown on Alexander Hernandez and stopped him via TKO (head kick/punches) at 3:43 of Round 2.

The opening round started with both fighters going to toe-to-toe with each other and started trading, although initially, Hernandez got the better of Cerrone. But Cerrone got back into the fight and landed a knee on Hernandez. The crowd broke up with chants for Cerrone.

The Cerrone again came back with head kicks and by this point, there was a swelling on Hernandez’s eye, he then continued with elbows and bloodied the opponent’s face. 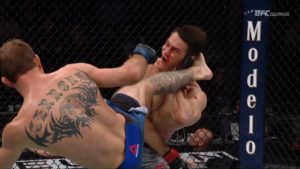 Cerrone again landed few good punches and caught Hernandez’s chin with a knee. Although Hernandez showed a good chin in the first round, he lost most of the exchanges.

The second round again started with quick pacing from both the fighters. Donald Cerrone retaliated and was fighting with extreme composure and relaxation, but he ultimately dropped a huge head kick on Hernandez’s head and landed a flurry of punches and ultimately referee had to step in.

"Cowboy" Cerrone breaks his own record for most wins (22) and finishes (16) in UFC history.

He also passes Wanderlei Silva for most wins in UFC/WEC/PRIDE/Strikeforce combined history with 28. An all-time great. #UFCBrooklyn

Cerrone wins. What a fight.

COWBOY CERRONE!!!!! He brought that left arm of Alexander Hernandez down with the body kick and BANG, right head kick closes it in the second round. We've seen it before!

COWBOY CERRONE GETS THE WIN AND THE PLACE COMES UNGLUED!!! #UFCBrooklyn

Cerrone: I want top five next. I even want Conor if he’ll agree to me. #UFCBrooklyn

Cerrone took some hard shots from Hernandez too, which should remind you that Cerrone does have a pretty good chin and that it's clearly no secret Dariush is a bit chinny. Hernandez's power might have been overstated.

There will never be anything like Donald Cerrone in MMA ever again. He’s straight out of a movie. #UFCBrooklyn

So I'm confused. Will Cowboy Cerrone still go yeehawing back to the stables or nah?

Cerrone has had some great fights in his career. But that might have been his best. BEWARE WHEN HE KISSES BABIES ON HIS WAY TO THE CAGE.

Donald 'Cowboy' Cerrone wants to fight Conor McGregor next. Not sure he'll get it but I dig the call out.

I'd watch Cowboy vs. Al Iaquinta or Cowboy vs. Justin Gaethje all day if either of those fights could happen #UFCBrooklyn

Dana White clears up Colby Covington’s future: He will get a title shot…sometime

Previous articlePuja Tomar Registers Her 1st Win in ONE Championship in a Shocking Upset of the Fan Favorite Priscilla Hertati
Next articleUFC Fight Night 143 Cejudo vs. Dillashaw: Play by Play Updates & LIVE Results