At the main event of UFC on ESPN 5, former interim champion Colby Covington defeated Robbie Lawler via unanimous decision (50-44, 50-45, 50-45) at the Prudential Center in a dominating fashion. 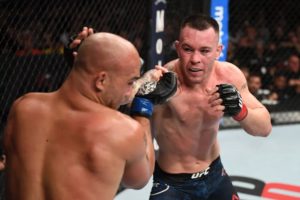 This win over Lawler sets up a fight with UFC welterweight champion Kamaru Usman who Covington took no time in calling out. He took a dig at former champion Matt Hughes.

After the fight, he also thanked the Trump family for making it to the fight.

Thank you for the phone call and always supporting me Mr. President!Thank you to the first family @DonaldJTrumpJr @EricTrump & @kimguilfoyle for coming out front row and cheering me on! If people thought tonight was a landslide, wait until the 2020 election! God bless America! 🇺🇸

Jorge Masvidal vs. Leon Edwards on the same card makes a ton of sense. #UFCNewark

I'm really hoping ESPN has extra security on hand because right now Colby Covington will be standing next to Kamaru Usman at the broadcast desk for an interview.

No chance that could backfire. #UFCNewark

For 25 minutes I found myself liking Colby Covington. He was magnificent.

Here’s the heated exchange between Usman and Covington on ESPN

Make no mistake, Colby Covington is one hell of a fighter. His win over Robbie Lawler proved that, beyond any doubt. But his Matt Hughes reference in his post-fight interview was plan awful and way beyond any “heel persona” he has been cultivating over the last few years.

The most annoying thing about Colby Covington is how amazing of a fighter he is.

If you put biases to the side, he just made Robbie Lawler look like a .500 fighter on the regional circuit.

@Ruthless_RL KO first round over Qweef. Who wanna bet a bag?

I usually impartial, but I find myself pulling for Robbie in a big way

Robbie is throwing them hammers!

Colby can run rounds like that ad nauseum. Robbie gotta make him respect something in 2 & 3 to get something goin.

Has no one ever taught Colby how to do a rear naked choke?

Usman Vs Covington! That’s what needs to be done! #UFCNewark

Why Lawler doesn’t wanna fight??? They are bff @ufc

Love him or hate him @ColbyCovMMA is a real problem. 500 strikes and 20 takedown attempts over 5 rounds is just insanity!!!

Wtf was Robbie doing , sharp head movement and defense but no offense

The wrestling pressure gassed on @Ruthless_RL striking but @ColbyCovMMA punch like female dog. 600 swats from those pool noodles that kids play with

UFC: After UFC release, Bellator ready to welcome Cris Cyborg into the fold

Previous articleUFC: After UFC release, Bellator ready to welcome Cris Cyborg into the fold
Next articleDana White wants Jones vs DC 3 at HW – but both fighters don’t!