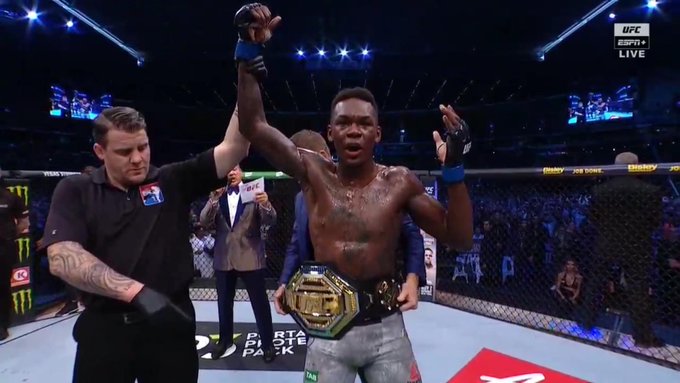 Whittaker started the fight great and he landed his fair share of shots and had his moments earlier in the rounds but at the end of the first round he was knocked down, just before the bell rang and in the second round, there wasn’t much Whittaker could do as Adesanya had already neutralised his offence and his leg kicks weren’t landing on his punches were missing wide.

Then with a perfect left hook and right hook combo Whittaker was knocked down and immediately referee scrambled in to stop the fight.

It has been a great year for the style bender who in a span of nine months has defeated Anderson Silva, Kelvin Gastelum and Robert Whittaker. His next challenge will be against Paulo Costa who is coming off of a decision victory over Yoel Romero.

BIG DRAMA IN MELBOURNE!@stylebender knocks out Robert Whittaker in the second round #UFC243 pic.twitter.com/1vcIOI8gxo

The best middle weight ever is @stylebender no question about it. Congrats Bro👏👏👏.#thelaststylebender#UFC243

I've said it before, I'll say it again:

Holy shit that was crazy… thought it would be a 5 round war but all credit to Izzy that was a beautiful shot to the jaw to finish it. So gutted for Rob as a fan, he will be back I’m sure. 🙏🏻 #UFC243

How do people expect Israel Adesanya not to talk all that shit when his head movement is so good you know damn well he never been slapped for it. 😂#UFC243

Adesanya says on the ESPN+ post-fight show that he rehearsed his entrance four or five times yesterday with his friends. "You see that entrance? Who else? I'm a born entertainer.” #UFC243

Israel Adesanya for the cover of UFC 4.#UFC243

I think Adsanya is moving up to light heavyweight just to fight Jones lol. #UFC243

Adesanya inspiring all the skinny mother fuckers in the UFC #UFC243

I hope tonight has made you lot respect Kelvin Gastelum a little more. #UFC243

respect to every Robert Whittaker
fan out there, he'll be back !!#UFC243