Khabib started the fight extremely dominantly with classic ground and pound and pressuring him with his wrestling. In the second round, however, Poirier had little success as he caught Khabib with an overhand right which wobbled him for a bit, but Khabib managed to take Poirier down and dominated him on the ground for the remainder of the round. 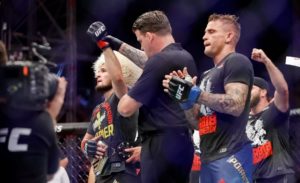 It was the third round where Poirier had the most success as he had locked Khabib a tight guillotine choke and it looked like he had the Russian, but Khabib managed to get out of that position and immediately transitioned to Poirier’s back and locked him up in a rear-naked choke and ultimately had Poirier tap with just 2:06 seconds remaining on the clock.

With this win, Khabib Nurmagomedov improved his record to 28-0.

Instantly jumps out of the octagon to hug Dana White

If I had that neck like that it be a wrap

mark my words @TheNotoriousMMA will win the rematch

Many have tried , none have succeeded . Watching Khabib fights are amazing . The calmness , the control , the ability to break his opponent’s will to compete is outright fascinating #UFC242

No matter what the outcome I’m always riding with my guy! Still a champions heart and tremendous human being! @DustinPoirier #ufc242

Damn Khabib made him quit! Beast.

Khabib is so good even his wife has never got top mount on him. #UFC242

Dana White to Conor McGregor: DO you want the Khabib rematch now?