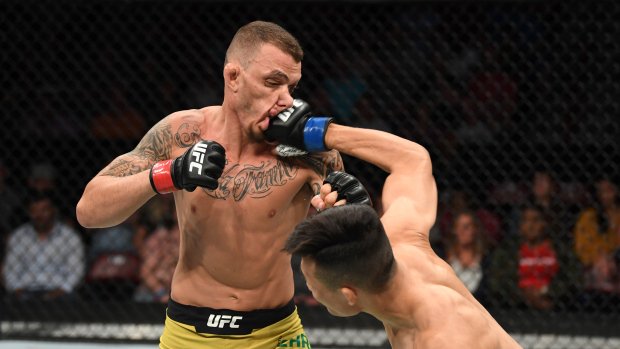 After a seventh month layoff, The Korean Zombie Chan Sung Jung knocked out top featherweight contender Renato Moicano in just 48 seconds at the main event of UFC on ESPN+ 12 at the Bon Secours Wellness Arena in Greenville.

As the first round started both fighters came out swinging and it wasn’t long until he landed a right hand followed by a short left which dropped Moicano, he then followed up heavy ground-and-pound until the referee stepped in to stop the fight. With this victory, Korean Zombie improved his record to 15-5 inside the Octagon. 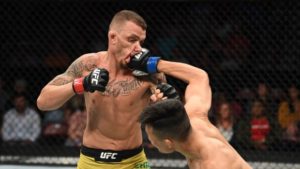 “I was prepared for a five-round fight, but I’m beyond happy to be eligible for a title shot,” Chan said in a post-fight interview.

“It’s becoming closer and closer. I never plan my fights to be exciting, but they usually turn out like that.”

KOREAN ZOMBIE IS BACK!!! Knocks moicano down immediately with a right hand and ground and pounds to the finish! Don’t bury the Zombie yet kids!

Renato Moicano's coach backstage after watching his fighter get deleted by the Korean Zombie. #UFCGreenvile pic.twitter.com/SHTCBDt7NG

Korean Zombie gets it done in no time!

I love the Korean Zombie so much

One thing I love in MMA: You wouldn't necessarily assume a crowd in Greenville, South Carolina would go nuts for a win by a fella nicknamed "Korean Zombie," but they for sure just did.

The Korean Zombie Chan Sung Jung is the first featherweight in UFC/WEC history with two knockouts in under a minute each.

But seriously if you don’t love The Korean Zombie, go fuck yourself.

1) Go fuck yourself
2) Repeat step one

And that's why. KZ used to have ugly mechanics in his early career. Then he got better. A lot. That's when he married insane durability and legitimate ability. What a terrible setback for Moicano. What a reminder of what we already knew for the Korean Zombie.

Even in the small amount of exchanges during that fight, Korean Zombie already looked multiple levels faster, sharper and more polished than he did in both of his other fights, since returning to the cage. What a performance! #UFCGreenville

I’m gonna nip this in the bud before it even starts:

Renato Moicano is NOT overrated. He’s lost to Ortega, Jose FUCKING Aldo, and the Korean Zombie. There is not a damn thing wrong about losing to those men.#UFCGreenville

Whoa!!! The Korean Zombie dusts Renato Moicano in under a minute!