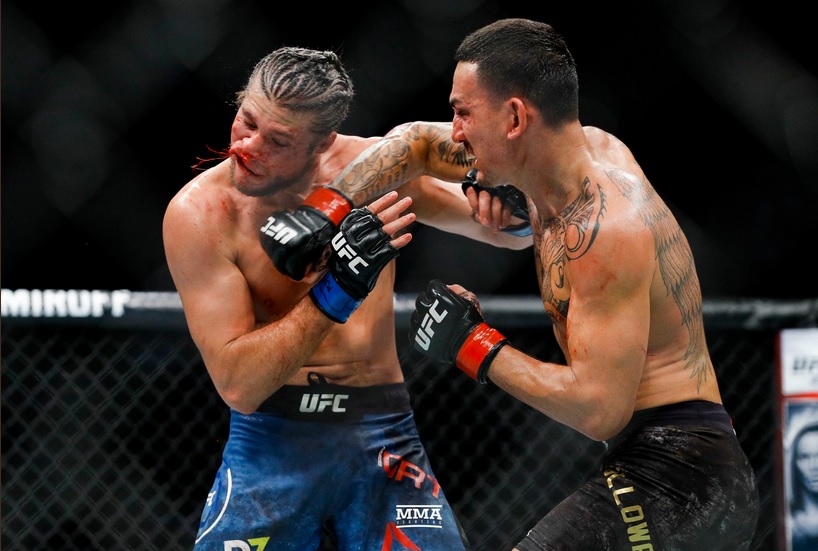 In one of the most anticipating fights of 2019 in the featherweight division, Max Holloway battered and completely destroyed Brian Ortega via doctor’s stoppage in the fourth round to successfully defend his title for the second time in a row at the Scotia Bank arena in Toronto, Canada.

With that impressive victory, Max Holloway is now on a 13-fight winning streak. The fight was called off by the doctor after four rounds. Ortega’s left eye was almost closed, his face a bloody mess. It’s a testament to Ortega’s toughness that he made it that far. 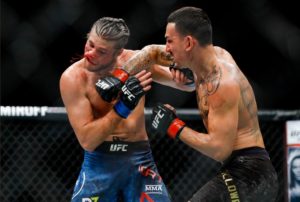 This victory must bring a sigh of relief to the Hawaiian Max Holloway, who has had injury plagued year as he had to pull out thrice this year. Brian Ortega now has one loss in his professional career and his record now stands at 14-1-0 with no contest.

Twitter couldn’t believe the way Max Holloway dominated Brian Ortega at UFC 231, here is how the Twitterverse reacted to the fight.

One of these is made out of the strongest material known to man.

The other is a nokia phone. #UFC231 pic.twitter.com/pEhDmjWD2v

The curse has been broken #UFC231 pic.twitter.com/swJTgCpohN

Anyone notice Ortega going over to mini blessed and fist bumping him as soon as Buffer announced the result? Ortega is such a good dude with incredible heart. Holloway is unbelievable. #UFC231

Woooooooooo!!!!! Good Job Both Fighters!! Love To See That Kind Of Entertainment!!! @BlessedMMA #ufc231 🇺🇸🏆🇲🇽 Enjoy The Victory, If @TeamKhabib Ducks Me Let’s Run It – Respect

Mini Blessed carrying his dad's title back to the locker room. #UFC231 pic.twitter.com/wXepWwJtXZ

That's the best performance in the UFC since McGregor vs. Alvarez. It's that good. Magnificent. #UFC231

Props to Ortega for never giving up in that #UFC231 fight. Definitely the hardest and most impressive fight of either man's career thus far. pic.twitter.com/m39kOISeYw

Max Holloway continues to add to an incredible legacy as the best 145lbs fighter in the world. Now unbeaten in 13 straight fights including wins over:

I have no idea how Brian Ortega never fell down ONCE during all of that. Just unreal. #UFC231

I knew it'd be good but I didn't think it'd be THIS good. #UFC231 pic.twitter.com/DOF2ueAz4g

What the hell is Brian Ortega's chin made out of? How on earth has he not been dropped from any of these shots? Crazy. #UFC231

Max Holloway being the underdog to Brian Ortega should be remembered as one of the most hilarious betting lines in MMA history. Clear, and huge, skill discrepancy. #UFC231

What a absolutely phenomenal fight!!!!

Ortega is one tough dude but Holloway, man, his fight IQ and movement is just on another level. 👏🏻👏🏻👏🏻

Ahh what a fight! So torn between the two. Such great men. I felt the difference was that handspeed for Max. Great technical fight! Ortega will be back for sure! He has the heart of a lion! #Classic #UFC231

Absolutely zero shame for Ortega. He never quit. @BlessedMMA was simply on another level. Incredible.@ufc #ufc231

Damn that was a great scrap. Congrats to Holloway and Respect to both 🙏🏽 #UFC231