Twitter reacts to Ryan Bader knocking out Fedor Emelianenko with one punch and being crowned the Bellator HW Champ!

It was a crazy action filled Bellator 214 as Ryan Bader knocked out MMA legend Fedor Emelianenko within 35-second of the first round to become Bellator’s first ever two-division world champion. With this win, he has also won the heavyweight Grand Prix. 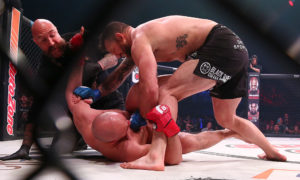 “To be a two-division champion, it’s surreal man,” Bader said. “What a night.”

Here’s how fans and experts reacted to the brutal knockout win of Ryan Bader:

Ryan Bader KO's Fedor Emelianenko in about 30 seconds. He is the first simultaneous two-division champion in Bellator history. Heavyweight and light heavyweight. Dominated his way through the tournament. #Bellator214

Scott Coker says he will leave the decision of whether or not Fedor Emelianenko fights again completely up to Fedor. Also confirms his contract with Bellator did come to an end tonight.

Bader makes short work of Fedor, crushing him with a single punch. He absolutely bulldozed through the tournament and now is the first Bellator champ champ. A talented athlete and fighter finally getting grand recognition.

Fedor's a legend and will always be, this doesn't take anything away from his legacy. The GOAT. We love you. #Bellator214

Good for Bader, man. Exited the UFC on a 7-1 run, never got a title shot. Now he's a two-weight champion for Bellator and just clobbered the great Fedor Emelianenko in absolutely stunning fashion.

You guys remember when Fedor KO’d Arlovski out of midair then retired post-fight and never ever fought again? Man that was the best

Fedor Emelianenko just been put to sleep in seconds by Ryan Bader☠️ pic.twitter.com/ktbbd6gWCH

Well, that was anticlimactic… #BellatorWGP

Wow @ryanbader 👏🏻👏🏻👏🏻 , I am legit sad to see the last emperor go out like that , but Bader’s run in Bellator has been nothing short of incredible. This guy is killing shit , way to rep America.