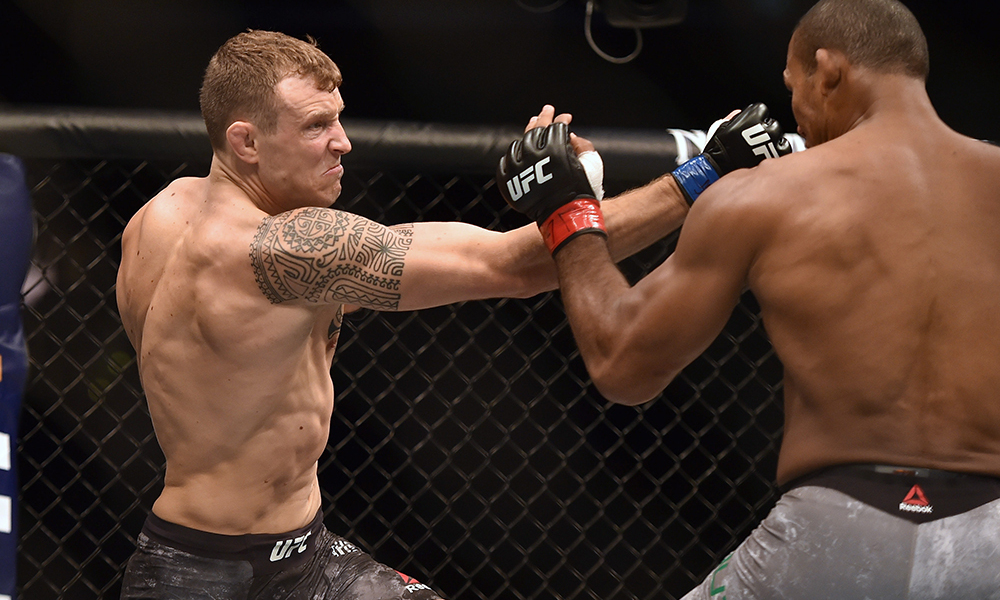 UFC Fort Lauderdale saw quite a few surprises in the Octagon, as a veteran returned, and the main event saw a massive upset. When Jacare Souza returned to face Jack Hermansson, it seemed a foregone conclusion, but it was anything but one. Given that Souza had been set to face Yoel Romero originally, the loss to the #10 ranked Hermansson was not expected.

Jack Hermansson pulled off the shock of the century by defeating him. On the other side of things, Ion Cutelaba returned to the Octagon after nine months away, only to be defeated by Glover Teixeira.

Mike Perry put on a showcase in his fight, but one of the highlights of the night was Greg Hardy finally getting his first-ever win in the UFC. After a less-than-impressive debut, where he was disqualified due to an illegal shot, Hardy had a lot to prove — and prove that he did. In his first-ever UFC win, he needed less than half a round to show why Dana White had hired the former NFL player. However, the reaction tended to be quite negative, as the legitimacy of his opponent was called out.

That was so impressive!! Hermanson definitely has every bit of talent and skill to become a World champion

Looks like 🐊 is going to need a stoppage. Hermansson is throwing a ton and landing a ton. #UFCFtLauderale

And after fighting a few weeks ago too!! Hermansson putting himself right in the mix with this win tonight.

Feel for Souza. Last time he was going to get a title shot he fought Whittaker & lost. Always been so close to that elusive title shot but comes up short #UFCFtLauderdale https://t.co/VpInWqminH

Up until two weeks ago when he beat David Branch, I didn’t know who Hermanson was. Now he’s beating JACARE. This sport is crazy. #UFCFortLauderdale

Good to see some new blood in the middleweight division. Hermansson is relentless with his pace. Jacare looked good at times. I don’t think he’s slowed down. Huge win for the Joker! Give this guy a big fight. #UFCFtLauderdale

If feel@amazing if i fought pewee Herman too

Is it me or does Smoliakov look terrified in there?

What a joke of a fight. Smoliakov might be the worst fighter on the UFC roster, he ran away and didn't look like he wanted to be in there.

Woow where did they find this guy

Super slick ground work from Glover Teixeira en route to submitting Ion Cutelaba in the 2nd after a tough first. Two nice wins a row for the 39-year-old. Teixeira is now tied with Jon Jones for most submission wins in UFC light heavyweight history, per @ESPNStatsInfo.

Before Mike Perry, Alex Oliveira had never lost to an African American fighter before. Historic win for the athletic and explosive Perry.

I hate that I’m saying this but I’ve had a little wine and life’s too short. I am so intrigued by Mike Perry for some reason and I am so tired of pretending otherwise.

Well, the UFC went looking for someone Greg Hardy could beat. And this time they found him. How long we gonna keep doing that?

Anyone else not watching this dudes fights?
Not giving him the time of day!
Who the fuck would promote a dude that abuses women?
Fuck Greg Hardy!

I remember when celebrities or athletes would try to fight in PRIDE FC… PRIDE would put them in there va actual fighters. (See cro cop vs dos caros jr) showcase the REAL …. not the JABRONI

And tonight at #UFCFtLauderale the co main event defrauded two scrubs that are seeking to do what #theKraken has already done and both competitors have failed to do, any guesses on this amazing feat? The answer: get a win in the UFC. #amateurHour #fuckGregHardy #ufc #undefeated

Not only is Greg Hardy unpopular, not only is he a piece of shit, and not only is he the stupidest embodiment of the dumb meathead MMA archetype… he also SUCKS at fighting. They had to bring back the dude who got owned by Cyril Asker to gift him a win, & let me say: WAR DMITRI

Wow, amazing. Greg Hardy beat the only man on earth with a smaller gas tank than himself. Feed this bitch to Ngannou

Congrats @JimMiller_155 on 31 fights in @ufc and getting big win in front of his family. Awesome to see class and longevity!! #UFCFtLauderale

Previous articleBellator 220 Results
Next articleWatch: Emotional Rory MacDonald interview where he confesses he doesn’t have it in him to hurt people anymore