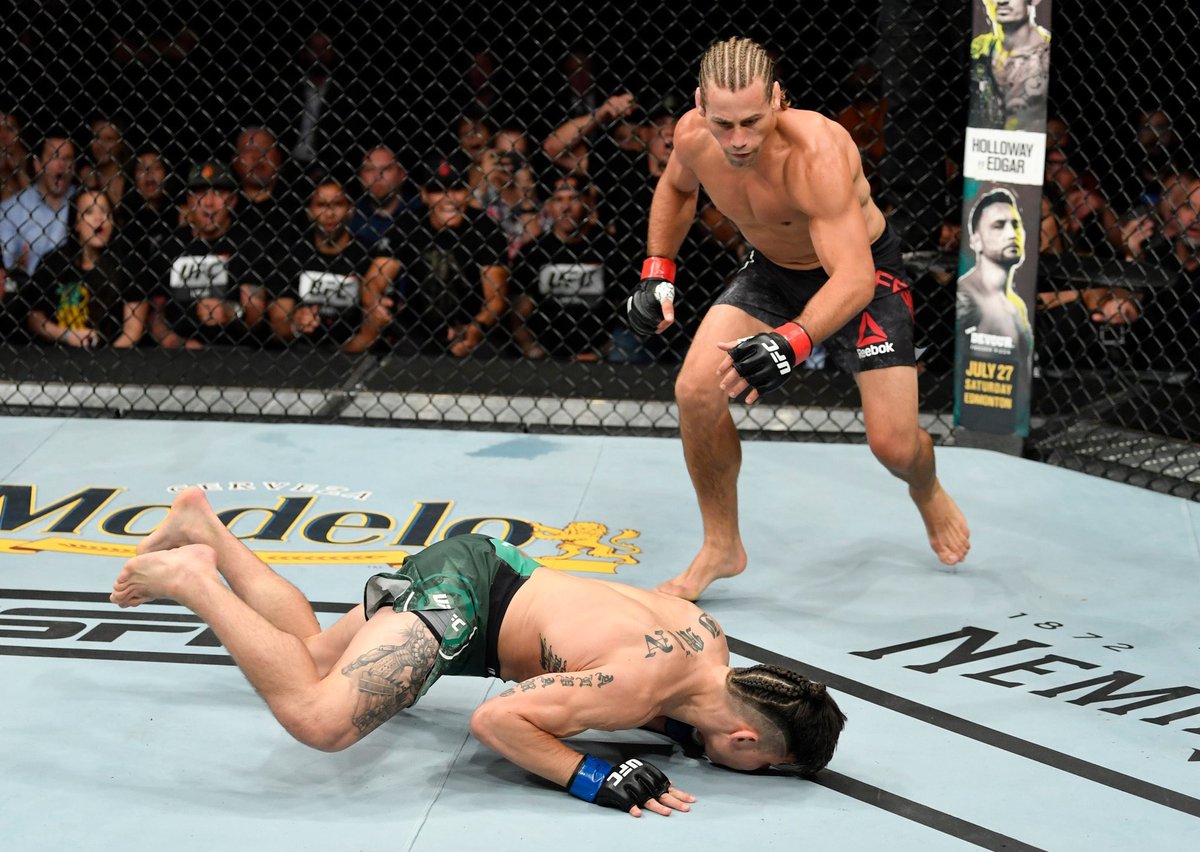 The California Kid Urijah Faber made a huge statement at UFC Fight Night 155 as he knocked out #15 ranked contender Ricky Simon at Golden 1 Center, Sacramento, California in the first round.

It took all but 45-seconds for Faber to unload an overhand right on Simon to drop him and then follow up with a series of strikes until the referee had to step in. 40-Year old Faber returned to the Octagon after two-years.

He retired back in 2016 after defeating Brad Pickett in his last fight at UFC on Fox 22 which took place in December of 2016.

That’s why he’s a Hall of Famer. Congrats @UrijahFaber

OMG!!! what a come back for the HOF @UrijahFaber 👀👀👀.
Respect CHAMP🙏#UFCSacramento

Congrats @UrijahFaber If you want to fight for the title again we should go at it. I always wanted to fight a legend

“Daddy did that for you today.” ❤️ (via @UrijahFaber) pic.twitter.com/l7R5V1qubZ

@UrijahFaber is a fuckin legend! @ufc

And Urijah Faber scores a first-round TKO! He's back! #UFCSacramento

It should be a requirement that Urijah Faber has to change his nickname from California Kid to California Man now that he’s 40 and shit. #UFCSacramento

Is Urijah Faber the first UFC Hall of Famer to win a UFC fight after his induction? #UFCSacramento

Only 1% predicted Urijah Faber would get the 1st round KO.

Good to see @UrijahFaber back tonight. Favorite fighter since before I ever started training. @ufc #UFCSacramento

@urijahfaber didn’t shock me at all. 😂😂😂 @ Sacramento County, California https://t.co/kOqUDLxY2R

Urijah Faber gets the first round KO. In 2019. Yep you read that right.

Previous articleWatch: Michael Bisping’s real time reaction to Urijah Faber’s stunning KO
Next articleAspen Ladd is not blaming Herb Dean or the weight cut for her loss at UFC Sacramento