Today, Daniel Cormier showed his heavyweight domination by submitting Derrick Lewis in the second round to successfully defend his UFC heavyweight title for the first time at the main event of UFC 230 in the historic venue of Madison Square Garden in New York City.

In the beginning, Lewis tried to be aggressive by fighting tall and throwing snapping straight punches and kicks to the body, but he got taken down in the first round by Cormier and was dominated with him being on top of the Black Beast. Similar start happened in round two, but this time, Lewis was submitted comfortably by Cormier. 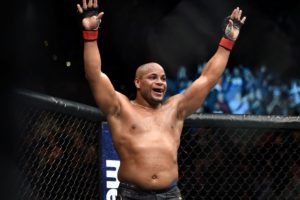 Twitter went frenzy, as Cormier defended his heavyweight title for the first time, here, are the top reactions;

If you don't love Daniel Cormier, we have absolutely nothing to talk about.

Very happy for you @dc_mma
Every fight HISTORY 🔝
You deserve everything what you have.
We are proud to have captain like you.#weareAKA #andstill #DanielCormier https://t.co/jE6YOxFUwS

Swear I love DC! He’s brilliant and if he fights Lesnar I’m going 100% cos that will be brilliant! Daniel Cormier take a bow you legend! @dc_mma

That was some James Toney-like TD defence from the Beast there. #ufc230 pic.twitter.com/olCAvFMROa

Imma say it again, Daniel Cormier is the best thing to ever happen in #MMA. #ufc #UFC230

Daniel Cormier gives a UFC belt to each of his two kids and then has them answer "my dad!" when he asks "who's the champ?" That's on brand for the Daddest Man on the Planet™️

Also, it must be said that Daniel Cormier has always been a class act. He has never embarrassed himself to sell a fight. Just a good dude with a dad bod that whoops ass.

Hey @danawhite, you’re the absolute best Brother. Love ya. Thank you for elevating the @ufc AND Boxing. However….I did warn you about Lewis vs @dc_mma. NO DUDE w/ a lifetime contract with Popeye’s Chicken is beating a champion like Cormier. I warned you. I was NOT wrong. Sorry!