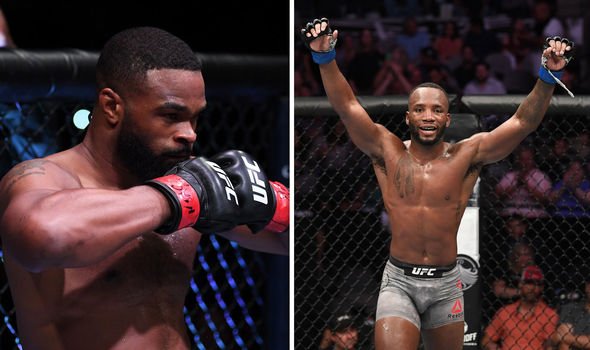 “Merry Christmas 🎁🎄 @leon_edwardsmmawatch what you ask for. Now you about to get fucked clean up at the crib!
#NoChills #UFCLondon #March21#MainEvent #Redemption –
@ufc send me that lil fancy flier to post!” – Tyron Woodley posted.

Back in October, Leon Edwards said that he was offered to fight Tyron Woodley at UFC 246, which will take place on January 18. The fight would have served as the co-feature to Conor McGregor vs Donald Cerrone.

Leon Edwards in on the cusp of a title shot as he is currently riding on an eight-fight winning streak having beaten the likes of Donald Cerrone, Vincente Luque, Gunner Nelson, Rafael Dos Anjos etc. His last loss in the UFC came to current UFC welterweight champion Kamaru Usman at UFC on Fox 17 in December of 2015.

On the other hand, Tyron Woodley hasn’t competed in the octagon ever since his title loss to Kamaru Usman at UFC 235 in March earlier this year.

Last month on the Ariel Helwani show, Tyron Woodley claimed that he would fight Edwards, but was worried that fans wouldn’t be too interested in watching the fight.

“The (expletive) up part is my son was like, ‘Who is that?’” Woodley said on Ariel Helwani’s MMA Show (via MMA Junkie).

“My kids know everybody. They play the video game, so when you got to explain to somebody who the person is and how good they really are, I have to pump up to the fact, to the people, and to the peers on how dope Leon is, because he is dope,” Woodley continued.

“He got super crazy strategic striking, super sharp, great cardio. He has good IQ, switched things around in the (Rafael dos Anjos fight), in the middle of the fight, so he’s dope as (expletive) as a fighter, but I’m going to have to sell the fact on how dope he is.”

Previous articleDonald Cerrone explains why Justin Gaethje is getting overlooked for a LW title shot
Next articleThe MMA world wishes everyone a very, merry Christmas on twitter!