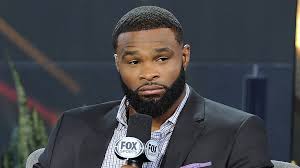 UFC Welterweight Champion Tyron Woodley who is in Glendale, Arizona as an analyst for the UFC on FOX 29 event sat down with MMA Fighting recently for an interview. He talked about his injury, the interim title fight between Colby Covington and Rafael Dos Anjos, Colby’s trash talking and his Roufusport teammate CM Punk.

Tyron Woodley believes that Colby’s antics are actually working against him terms of popularity on the social media platform.”It’s written, scripted and so terrible. He’s sitting down with a group of guys who are writing this out and it’s kind of embarrassing. It’s more embarrassing when the guy who manages the front desk of ATT (American Top Team) is scripting out you entire onslaught and doing photo shops,but when you get in that octagon, words ain’t gonna help you, memes ain’t gonna help you, you’re gonna get your a** whipped badly.”

Woodley says his shoulder injury has almost recovered through the use of stem cell program and he would be able train at a 100% after 6 weeks. Looking for his return in either July or August, Woodley believes that staying ready for the International Fight Week will pay dividends.” It’s a crazy game, fighters get injured, they pull out. I’ve never been wrong and I have a good feeling the UFC might need me on July 7 and I’ll be ready.”

Thoughts on the Interim Title

Even after being a very active champion, defending the championship belt three times against contenders, the introduction of an Interim Title does not bother him.” It is really a number 1 contender fight because there was no clear contender anyways this fight needed to take place. If RDA (Rafael Dos Anjos) couldn’t wait for 4 weeks, then he is rolling the dice. I accepted the fight against him, but they wanted me to fight in June and couldn’t commit to the fight at that time. I was confident of fighting in July but the UFC wanted to move a bit quicker so it was set for UFC 225.”

Tyron Woodley was also asked about CM Punk’s progress in the interview who is scheduled to face Mike Jackson at UFC 225. Woodley revealed that CM Punk has had two smoker fights in the gym and takes a lot of personal sessions for his sriking and jiu jitsu apart from sparring with the professional fighters. Woodley also calls him very humble for a person of his stature.