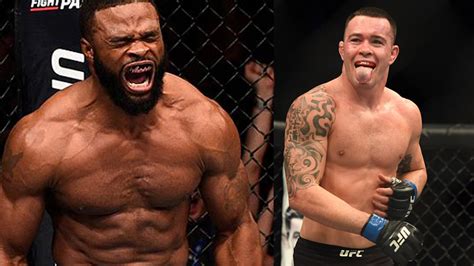 Tyron Woodley and Colby Covington had been throwing barbs at each other on social media as well as in the press since a long time.The rivalry got more heated up ever since Colby started talking trash about Tyron calling him by the name‘Tyquil’ and did a disrespectful callout of Woodley after his win over Demian Maia.He also had his own social media antics where he had posted videos of him making fun of Tyron.

The following antics didn’t go well with Woodley as he previously advised reporters at the press conference not to talk about Colby.But offlate,Tyron has also added fire to the feud by calling his former teammate at American Top Team an easy beatdown for him and also offered Colby a hefty takedown wager .

Last June when Colby  won the Interim Welterweight Championship by defeating Rafael Dos Anjos ,he was the man scheduled to face Woodley next.But due to some nasal surgery Colby walked away from a title unification bout against Woodley in September where Darren Till was made to fight Woodley where the champ won via a second round submission.

The UFC recently decided to schedule the fight between Woodley and Covington at UFC 233 in Anaheim but because of Woodley’s hand injury he decided to move out from the card.Rumours of Kamaru Usman who just won against Dos Anjos facing Woodley were going on and there was also a call of a Usman vs Covington fight on the Anaheim card on Jan 26 but Woodley perhaps himself cleared that when he came up via his live Instagram session bashing Covington and talking about his possible fight.

“I am fighting ‘Queefington.’ When I’m fighting his little busted butt I don’t know. Hopefully sooner than later cause I know you all sick and tired of this dumb goofass videos that nobody’s f–king with, that don’t nobody think is funny, besides his dumbass. I know you all tired of him so sooner than you know, he will be getting that ass whooped and then you won’t have to worry about him no more. Because after I beat his ass, I promise you with everything I believe in, everything I love, everything I ride for, he will be very, very unlikely to want to talk s–t again.”

Woodley hasn’t confirmed that when he will be returning next year but there is an added anticipation for his fight against Colby considering the animosity both have against each other.