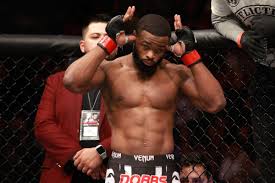 UFC Welterweight Champion Tyron ‘The Chosen One’ Woodley just knocked out the much hyped undefeated prospect from England, Darren Till and has just released his new single, ‘I’ll Beat Yo Ass’. The champ though still has his eyes on a couple of opponents in the welterweight division and of course a legacy fight with Conor Mcgregor.

Conor Mcgregor is set to face UFC Lightweight champion Khabib Nurmagomedov on Oct 6 at UFC 229 and although Woodley believes Khabib will win the fight, he hopes that Conor beats Khabib and later faces him for the welterweight strap.

“I’ll be there [at UFC 229]. I’ll be working the (commentary) desk…,” Woodley said on TMZ. “I would think that if Khabib’s really about that action, he’s going to do what he says, it’s going to be really tough for Conor to have any lead in that arm to throw that knockout punch in the fourth or fight round, so I would say Khabib to win.”

“But just for selfish purposes, if Conor wins, then the only fight that makes sense is for him to fight me. Try and get a third belt. From an analyst hat, my mind says Khabib but my bank account and my legacy says Conor. I would take that fight in a heartbeat.”

Woodley admits that Conor has better striking but believes he is more well rounded and the fight between the two of them has only one conclusion.

“I would smash him,” Woodley said. “He’s too little, he’s got one punch. What fighter have I ever fought that’s been able to beat me with one tool?”