Tyron Woodley says he can knock Canelo Alvarez out

Woodley lost his title to Kamaru Usman at UFC 235 in March earlier this year. Before that he held the title for nearly three years. He knocked out Robbie Lawler at UFC 201 to capture the welterweight title. 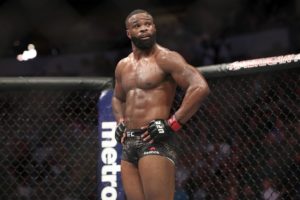 In a recent interview with TMZ, Woodley expressed his desire to box inside the ring. He said that growing up he was a big boxing fan and even said that he can knock out Mexican superstar Saul ‘Canelo’ Alvarez.

“All I wanted to do is box when I came up,” Woodley said. “I just started MMA at 23, so I felt I was a little old to start boxing at that age. But, since I was a kid, that’s the only sport I’ve ever wanted to do. So, most of my training is boxing training. I still can box right now.”

He said that the reason behind wanting to fight Canelo was because he was the No. 1 guy.

“…His defense is crazy. Slipping uppercuts. Who slips an uppercut? Make you look real stupid. So, I’m throwing all unorthodox. I’m coming and I’m trying to knock him out. If I land, he’s going down. Let’s not even play. If I hit Canelo with everything, throw some ass on the punch, it’s a wrap.”

Even though Canelo is the unified Middleweight champion (160lbs) in Boxing, he is moving up in weight class to fight the WBO light heavyweight champion (175lbs) Sergey Kovalev and Woodley held the title at 170lbs in the UFC. So the weight wouldn’t be the issue if both of them were to fight.