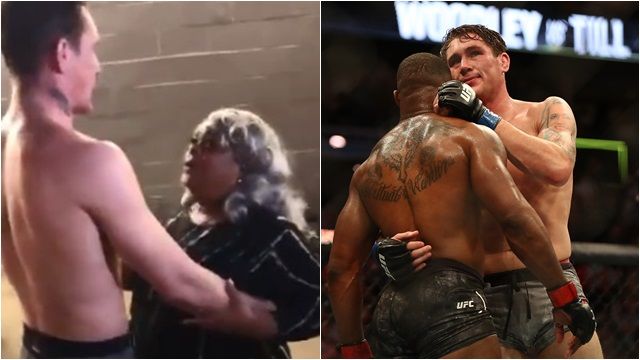 Going into UFC 228 fight week, Darren Till was the favorite and rightly so, he was on a devastating undefeated run leading up to the fight and Woodley was the underdog for the third straight championship fight.

Till was submitted by Tyron Woodley in the second round of the UFC 228 main event and lost the 0 on his record.

The build-up to this weekend’s clash intense as Till and Woodley acknowledged the threats posed by the other but ultimately it was the defending champion’s gameplan and smart fight IQ that came out on top. 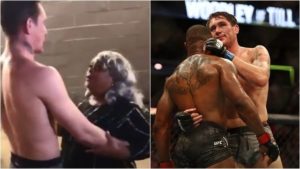 Following a loss, Till had a heartwarming exchange with Tyron’s mother backstage.

“No matter when you fight someone, it doesn’t matter if you hate them or you like them. I don’t hate Tyron. It’s never personal with me,” Till said in his post-fight press conference.

“It doesn’t work like that. That’s his family. I’ve got my family.

“Some guys do cross the line of insulting family members, whether it be girlfriends or whatever, online or to their face. It would never affect me but if somebody ever did it then they’d better know that when we come face to face they’d better be ready to fight with me because I’ll fight with them. I’m not about this pushing and shoving game at weigh-ins. If someone goes, it goes. It’s not a push. It’s a fucking punch coming to the face.

“And she just gave me words of advice. It was comforting. She gave me a nice, big hug and I told her to be proud of her son, who beat me tonight. I told her to go and enjoy it because they deserve everything.

“No matter what you say, people can give Tyron a hard time or whatever but he’s beat everyone and he’s just beaten me.

“Boring or not, he’s just beaten me and that wasn’t boring and him and his family and his mother, they deserve it so it was nice to get a hug from her. It really was.”

We all know this was a valuable experience for Till and he will come back stronger from this loss.