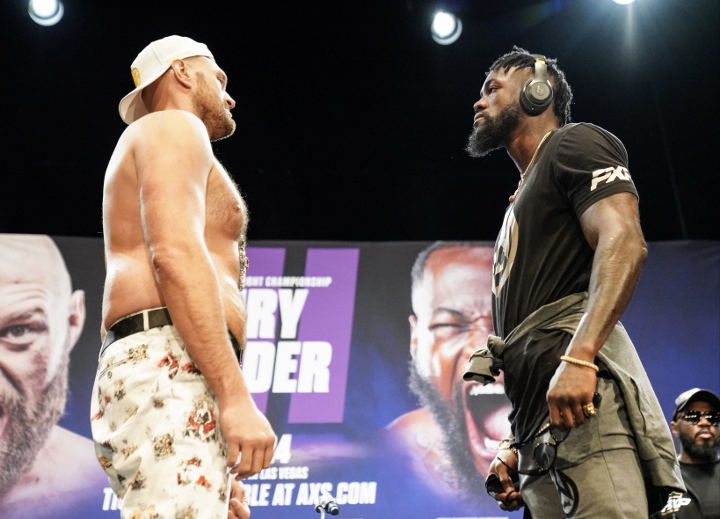 After a draw in their first encounter and a 7th round TKO win for himself in the second, WBC heavyweight champion Tyson Fury (30-0-1, 21 KOs) insists his third face off against Deontay Wilder (42-1-1, 41 KOs) will be over within the first three rounds.

Both Tyson Fury and Deontay Wilder’s previous appearances in the squared circle were against each other on 22nd February last year at the MGM Grand Garden Arena in Paradise, Nevada, where the Gypsy King thrashed Wilder to a 7th round win as well as handing the former WBC titleholder his first career defeat.

After the remainder of 2020 passed with no progress on a trilogy, Fury had originally moved on to an undisputed championship clash against unified heavyweight champion Anthony Joshua and the fight had even decided on a date and place.

Unfortunately, the four belt super fight has to wait for now as Wilder recently activated the dispute resolution provision which was included in the two fight deal he had inked with Fury after their first fight earlier, and the arbitrator has ruled in the favour of the “Bronze Bomber”.

Now, more than a month prior to their clash in Las Vegas, Fury and Wilder met at a press conference in Los Angeles on Tuesday, and the British boxing icon made one thing clear- his third fight against Wilder will be the shortest and easiest one.

Following the defeat last year, Deontay Wilder had pulled up a number of reasons behind his loss, from claiming that his water was “spiked” before the fight, to even accusing Tyson Fury of cheating by doctoring his gloves.

Fury, on the other hand, said that he hopes Wilder will not make any ‘excuses’ after he gets defeated once again on 24th July.

“All the excuses if you combine them all together, they’re not worth two cents,” said Fury about Wilder at the conference, “it’s all s***. He got battered, and he’s going to get battered again. Hopefully, zero, nothing so there’s no excuses.”

Fury was not originally interested in a trilogy fight against Wilder following the latter’s accusations against him last year and was far more interested in the Joshua clash, but as per the arbitration case, he will have to give the American his rematch.

While Fury still believes Wilder does not deserve a third fight, he has nodded to the judgment and predicted that the fight will be over within the third round with a knockout.

“It is what it is, the judges made the decision. We’re fighting here not because I want to give Wilder another fight because I don’t, he doesn’t deserve one,” the 32-year-old went on, “but because the judges ordered and we can’t go against what the judges said. Yes, inside the first three rounds.”

Do you think Tyson Fury can defeat Deontay Wilder within three rounds? Let us know in the comments below.