Tyson Fury ready to try MMA and Conor McGregor willing to train him!

Former heavyweight and current Lineal heavyweight champion of the world Tyson Fury is all set to step into the world of Pro Wrestling later this month when he takes on WWE superstar Braun Strowman at the WWE Crown Jewel in Saudi Arabia.

However, at NFL London, the Gypsy King said that he would step into the Octagon before the end of the year and is training with former two-division UFC champion from Ireland, Conor McGregor. 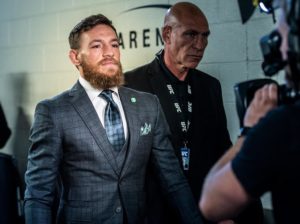 ”I’ve got something big coming up after this, even bigger than this, We might see Tyson Fury have his MMA debut this year too. It’s different, but like I say, Tyson Fury, taking over.”

“Yeah, I’ve been speaking to Conor [McGregor] about it, and he’s willing to train me. And it’s gonna be good. I come from a long line of bare-knuckle boxing champions. Getting hurt, getting bloody. You saw my last fight, blood everywhere! Nothing new to me. All a part of my heritage and upbringing. So, I’d love to get in there and smash someone up.”

How do you guys think will Tyson Fury do inside the Octagon?

Previous articleDiego Sanchez all for Demian Maia fight: Let us dance!
Next articleUFC: Watch: Hilarious reaction from Yoel Romero when confronted with his fear of heights!