Tyson Fury says he could flatten Brock Lesnar in 30 seconds Last month at after defeating Braun Strowman at the WWE Crown Jewel event in Saudi Arabia, the former heavyweight champion of the world Tyson Fury had said that he was more than willing to step into the world of Mixed Martial Arts and fight the likes of Stipe Miocic and Francis Ngannou.

Fury has also been training in MMA with UFC middleweight Darren Till and recently the Liverpudlian had also said that the chances of Fury competing inside the cage were pretty high. 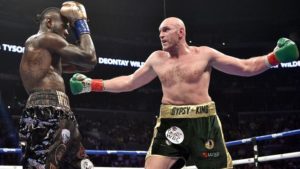 The Lineal champion recently appeared on the True Geordie podcast. where he expressed his interest in fighting the former UFC heavyweight champion and current WWE superstar Brock Lesnar. Fury also went on to say that he could easily beat ‘The Beast Incarnate’.

“Yeah, I fancy the fight with Brock for sure. Yeah, I watched a few of his fights for sure,” Fury said. “[He is] pretty handy, but I could flatten him in a WWE match or in a proper fight I could flatten Brock Lesnar in 30 seconds.”

Brock Lesnar was last seen inside the Octagon back in 2016 at UFC 200, where he defeated Mark Hunt via unanimous decision, which was later overturned into an NC by the Nevada State Athletic Commission.