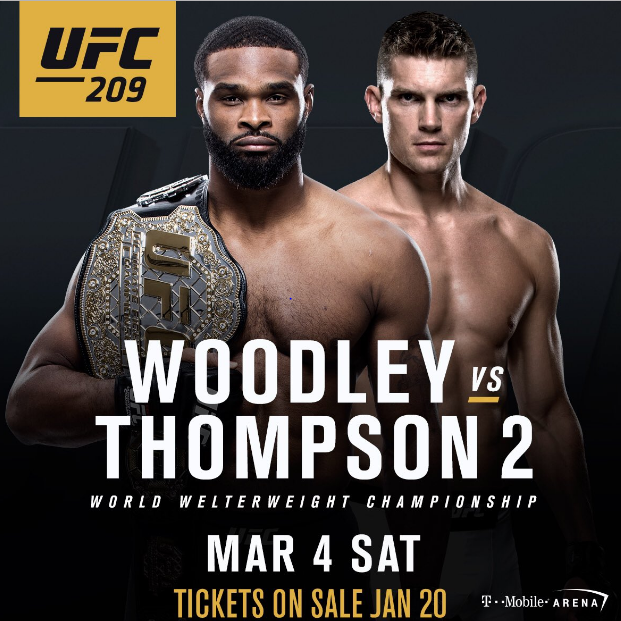 After a lack-luster showing at UFC 208, UFC is coming back to Pay Per View with UFC 209. To be held on March 4, 2017 at the T-Mobile Arena in Las Vegas, Nevada, UFC 209 promises to be a way more exciting event than its predecessor. With a title fight headlining the show, this event is must-see television for casual and hardcore fans alike.

In the main-event of the evening (morning in India), Tyron Woodley will look to defend his Welterweight crown (again) against Stephen Thompson. In the co-main event, Khabib Nurmagomedov and Tony Ferguson were supposed to fight for the Interim Lightweight Title but that fight has since been cancelled due to Khabib falling ill. Some fight from the prelims is expected to be bumped up to the main card.

As Michael Buffer would say “Let’s get ready to rumble!”.

It would suffice to say that these two men know each other. The ‘1’ at the end of their respective records is courtesy of each other. They battled to a spectacular draw in November last year in what was one of the best fights of the year. The general consensus coming out of the fight was simple: ‘Wonderboy’ won three rounds and Tyron almost stopped the fight. Going into the first fight, Tyron, despite being the champion, was an underdog. Nobody believed Tyron would be able to deal with the striking of Thomson, who is undefeated as an amateur and professional Kickboxer. Now we know, that not only can Tyron deal with it, he can also shut Wonderboy’s lights out with his ferocious right hand. In what was one of the best rounds of the year, Woodley dropped Thompson twice with his patented brick of a right hand and almost finished him with strikes, ultimately wrapping his neck in a tight Guillotine choke. Miraculously, Thompson survived the choke and went on to win the next round, ensuring the draw.

Despite almost finishing his opponent, Woodley is still the underdog going into this fight. Woodley is a former NCAA Division 1 Wrestler and is world class at it. Yet for reasons best known to himself, ‘The Chosen One’ rarely decides to wrestle in his fights and is always looking to shut his opponent’s lights out with his right hand. Just ask Josh Koscheck and Robbie Lawler what that hand feels like! Woodley is also much larger than most Welterweights, walking around at over 200 pounds. This gives him the edge in most clinch battles, as ‘Wonderboy’ found out much to his chagrin. Although he rarely uses his wrestling anymore, it is ever present for him to utilize.

Thompson is as different from Woodley as one fighter can possibly be from another. While Woodley relies on power, Thompson relies on speed and elusiveness. A fifth degree black belt in Kempo Karate, ‘Wonderboy’ is arguably the best pure striker in the sport today. Thomson relies heavily on head movement and likes to stay out of his opponent’s range with his kicks while possessing exceptional ability of closing the distance and getting out before his opponents can even blink. As unorthodox as he is good, Thompson stays in a very unconventional sideways stance with his hands down and his chin up, as if almost daring other fighters to hit him. He is also highly efficient in both the orthodox and southpaw fighting stance. He is one of the best kickers in MMA. With his flashy kicks and weird style, Stephen Thompson is definitely fun to watch!

The story here is clear: the fighter to make the most adjustments will win. Tyron Woodley seems a little more limited in the adjustments he can make. His bad habit of getting stuck at the cage was actually part of his game plan in the first fight. He certainly needs to use his wrestling more. Wonderboy on the other would like to stay out of Tyron’s range and work his striking.

Prediction: I believe Woodley will try to use his wrestling a lot more and make this fight ugly. He would also like to initiate the clinch every-time Thompson closes the distance on him as he is decidedly stronger than Thompson. And while doing these things, he will look for that right hand. Wonderboy will look the use a lot more kicks this time to maintain range. He almost looked tentative to kick in the first fight due to Woodley taking him down on a leg kick. Expect to see a lot more kicks from Thompson and lot more counter punching as Woodley closes the distance. Woodley will try to make this a war, but Wonderboy won’t let that happen.

The Pick: Stephen Thompson by decision

Dan Kelly, despite being 39 years old, has had surprisingly few years in pro fighting, having fought regularly only since December, 2012. A four time Olympian in Judo, Dan Kelly is still young in fighting years and for a guy who spent most of his combat career not getting punched in the face, he shows real skill for fist-fighting. While not the most technical striker, he maintains a steady pace with his punches. He, however, shows little head movement and is prone to not moving his feet much. He is a dangerous takedown artist from the clinch due to his judo background and can control his opponents on the ground due to his strength and good grappling skills.

It is pretty clear to most people that Rashad Evans is just not the same fighter that he used to be. The fighter who once was known for his lateral movements and quick hands, is now on a two fight losing streak and got knocked out in his last fight. His last win came in November of 2013 against an outsized Chael Sonnen and since then he has only fought twice, losing both times, and has spent the remaining time injured. This however, does not mean that he can’t still win, but at 37, he looks older than his opponent who is 39.

Prediction: The move to Middleweight may yet revive ‘Suga’. However, Kelly has good momentum and is riding a three fight win streak. He will look to out-strike Rashad and dominate him with his grappling.

The Pick: Daniel Kelly by decision

This right here is a potential fight of the night. In a fight of young Lightweight prospects, Lando Vannata will take on David Teymur, who is riding a two fight win streak.

Lando Vannata has quickly become a fan favourite after only having fought twice in the UFC. He almost knocked out Tony Ferguson in his short-notice UFC debut before falling to the more experienced foe in the second round. He followed this performance with a highlight reel knockout of UFC veteran John Makdessi, with a picture-perfect wheel kick in the first round. Coming from a wrestling background, Lando Vannata is a very talented and creative striker, opting to strike more than wrestle. He possesses very good head movement and likes to both say out of range and in the pocket. He can get careless in exchanges though, as was seen in the Ferguson fight, as he dropped his hand relying completely on head movements. That led to him taking shots that he should have avoided.

Teymur is a classic Muay Thai fighter He has excellent kicks and is a good counter striker. He is also a good wrestler and will be hard to take down. The relatively unknown fighter will look to make a name for himself with a win over Vannata.

Prediction: Vannata will once again be looking to amaze fans with his flashy style and will be looking for a knockout. He has a tendency of dropping his hands so look for Teymur to stay out and counter him. Wrestling will probably play some part. The opposing yet similar fighting styles of these two fighters should make this a fun fight. However, Vannata’s unpredictability and unorthodox strikes should make this a win for him.

The Pick: Lando Vannata by TKO

Mark Hunt and Alistair Overeem have been fighting for almost two decades and are now in the twilight of their careers. Both transitioned from Kickboxing to MMA in the 2000s and have since declined significantly in their abilities. However, in fighting, power is the last thing to go and both these men possess ample amounts of it.

Alistair Overeem is coming off a first round knockout against the champion, Stipe Miocic. Alistair has never had a great chin and has been knocked out more times than one would care to count. His already weak chin is even weaker now as he was knocked out cold due to ground and pound against Stipe. He has, however, changed his style to protect his chin more. He now looks to counter his opponents and use his reach rather than bullying his opponents. This style of fighting is more necessary than ever against a guy like Hunt.

Mark Hunt is coming off what was originally a loss against Brock Lesnar at UFC 200 (the loss has since been turned to a ‘No Contest’ due to Lesnar testing positive). Hunt’s biggest weapons are his granite chin and his right hand, which is arguably the hardest shot in all of MMA. Known for his walk-off Kos, Hunt has knocked out Roy Nelson, who has arguably the best chin in MMA and who hadn’t been KO’ed before, and hasn’t since. Hunt is not a very mobile fighter and mostly stays flat-footed looking for a right hand. He, however, has shown a great ability to attack with bursts of great speed, like when he knocked out Stephan Struve. Now late in his career, he has been finding it more difficult to pull the proverbial trigger, as evidenced in the Lesnar fight. He has still managed to look good and not like a fighter who is about to turn 43.

Prediction: Alistair will look to stay outside and use his range to avoid the right hand of Mark Hunt while trying to counter punch. Hunt will look to close the distance and uncork his right hand. Expect to see no wrestling at all. Alistair will probably dance around in the first round but it is bad night for him if Hunt catches him, which I think he will.

The Pick: Mark Hunt by knockout

Previous articleBellator 174: Budd wins title, Marloes and Pfister announce retirement
Next articleMark Hunt’s UFC limbo serves as a reminder of the need for an MMA Union