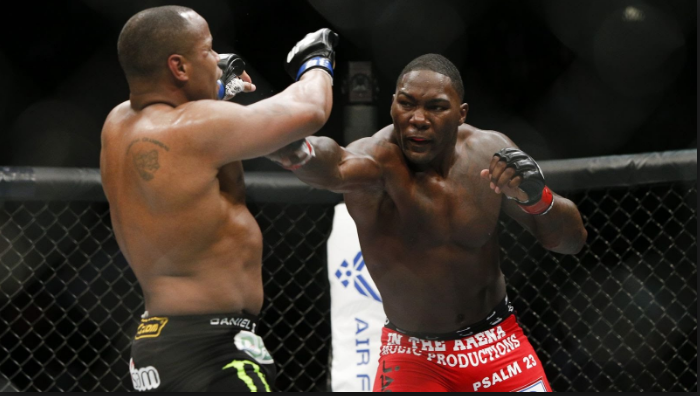 Anthony Johnson is easily the most feared striker in the UFC. Possessing one touch (notice how I didn’t write ‘punch’) knockout power, ‘Rumble’ is 11 and 1 since permanently moving to Light Heavyweight. After years of struggling to make weight at Welterweight and Middleweight, Johnson has found a home at 205 pounds. The lone blemish on his record as a Light Heavyweight is a submission loss to a man he is expected to face this Saturday night: Daniel Cormier.

As dangerous as he is inside the Octagon, he is known to be a friendly and nice guy out of it. This has almost been a knock against him, as many people believe that his overly friendly behavior outside the cage has led to him not being as big a star as he should be. ‘Humble Rumble’, they call him. As weird as that nickname is, it is kind of true. But Anthony Johnson doesn’t care. He is just obsessed with being the best Light Heavyweight fighter in the world, which he very well might be, since certain Albuquerque based fighter is currently out of the picture.

Anthony Johnson was born in a small town called Dublin (not to be confused with the capital of Ireland) in Georgia, USA. Johnson was a JUCO College National Wrestling Champion in his younger years and then turned his attention to MMA, taking his wrestling skills from the mat to the cage. Fighting at Welterweight, Johnson won his first three fights in regional promotions. Johnson got a break early in the UFC, replacing an injured Steve Bruno against Chad Reiner. He went inside the Octagon a rookie of three fights, and thirteen seconds later, he had everybody’s attention. For the next 4+ years, Johnson fought in the UFC’s Welterweight Division, fighting a total of 10 times – winning seven and losing three. After struggling to make weight for several years and missing the weight entirely on multiple occasions, Johnson finally moved up to the Middleweight division – a move that was long overdue. Anthony Johnson was to make his Middleweight debut against Vitor Belfort at UFC 142, but he missed weight again. He lost the fight via submission and was eventually cut from the UFC.

Any person who has ever been fired from a job will tell you, how much it sucks to lose your livelihood. Don’t count ‘Rumble’ among those people:

“I got sick before the weigh-ins and stuff. I had to drink fluids to get my body back in order. I did what I was told to do. Next thing I know, I’m being told to step on a scale. I step on a scale and that’s when I was weighing heavy, you know? It is what it is. I think my body was changing, know what I mean? It was trying to adapt. I started I guess getting my grown man body all of a sudden, know what I mean? I’m not trying to make excuses for anything, it just happened. Honestly, that’s the best thing that happened to me, with the weight stuff and then being cut from the UFC. That’s the best thing that ever happened to me since I started MMA. It just made me focus more. It made me more determined. It made me understand that in this business, with some people you got to have a straight business friendship, not think that this person a friend of yours or will try to understand your situation. I took it upon myself to learn the hard way. But, I don’t regret anything. They are just lessons learned.”

In hindsight, we know now just how right Anthony ‘Rumble’ Johnson was.

Johnson tore through his competition after moving up from Middleweight. He won his next five fights in spectacular fashion, four by way of KO/ TKO – two of them in the first round and two in the second. This win-streak also included a three round stomping of former UFC Heavyweight Champion Andrei Arlovski, a fight in which ‘Rumble’ broke Arlovski’s jaw with his right hand! He again had the attention of the UFC, and he finally received the call which he was waiting for.

Johnson continued his dominance in the UFC and won his fights against Phil Davis, Little Nog and Alexander Gustafsson – latter two by way of first round KOs. He was subsequently awarded a title shot against then champ Jon Jones. After Jones was suspended by the UFC following a much publicized hit and run incident and stripped off the title, Johnson was slated to face Daniel Cormier for the vacant title. And then Johnson ran into a brick wall.

After almost finishing Cormier in the first round with his vaunted right hand, Johnson was dominated and eventually submitted in the third round by Cormier. His performance in the third round was so bad that it prompted his coach, Henri Hooft to repeatedly shout ‘Don’t give up’. For a man who beats up other men for a living, it can’t get any worse than that. Johnson himself was embarrassed by the loss and it took him six months to even watch the fight:

“One day I was just lying in bed,” Johnson said. “I didn’t perform to the best of my ability, and I think it was probably six months after that I finally watched the fight. I just woke up at like two in the morning and decided to watch the fight. I woke up and it was on my mind and I just watched it to see what my mistakes were, and I was like okay, they were bad mistakes but they weren’t mistakes that were so bad they couldn’t be fixed.

“Nobody wants to watch themselves lose,” Johnson added. “It was a weird feeling in my stomach, because like I said, I didn’t perform at the best of my abilities. I think that’s what disgusted me the most. It made me disgusted. So the next time, it’ll be a different story on my end.”

It probably took him quite some time to shake off this loss, but he didn’t let it deter from his goal. Two years and three more knockouts later, Johnson finds himself in the same situation again – A title fight with Daniel Cormier – but ‘Rumble’ vows to be a different fighter this time:

“I’m definitely not the same fighter I was two years ago,” Johnson said on UFC 210’s media conference call. “Every day, every week, every month, every year I’m getting better and better, so you’ll see a different guy out there the next time you see me fight.

“[The loss] definitely lit a fire under my a** to train harder and know what I needed to do to beat this guy.”

It remains to be seen whether he’s a changed fighter or not, but it is probably very important for him to stay confident going into the fight, especially when he’s already lost to the man he’s facing. Regardless, we’ll find out soon enough.

Johnson has said that winning the gold would complete his career in MMA:

Just winning the belt will probably not put him up there with the best of the best, but it’s a step in the right direction.